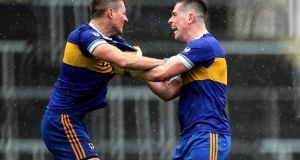 There was drama aplenty in the Meath SFC final as Ratoath performed a smash and grab to retain their title at a miserable Pairc Tailteann on Sunday.

The game was over the seven allotted minutes of added time when intercounty star Joey Wallace struck for a dramatic match-winning goal after Gaeil Colmcille failed to deal with an Andrew Gerrard sideline kick.

The champions were down to 14 men at the time, following Emmet Boyle’s red card on 57 minutes, and their hopes of back-to-back titles seemed to have disappeared when Gaeil Colmcille were awarded a penalty a minute into added time with the sides level.

Brian Hanlon made no mistake from the spot-kick but despite the concession of that late goal Ratoath held their composure and Bryan McMahon settled for a point from a free when he might have tried for a goal with the seven additional minutes almost up.

Goal hero Wallace - who finished with 1-3 - deservedly picked up the man of the match award for the second successive year. Wallace along with his brother Eamonn had played no part in the champion’s march back to the decider and both were playing their first part of this campaign.

The holders started a fast-moving encounter at a lively pace and had raced into a 0-5 to 0-2 lead by the 10th minute. However the Kells men, in their first final appearance since winning the title in 1991, then enjoyed a spell of dominance and deservedly led 0-9 to 0-6 at half-time.

Ratoath fought back strongly in the third quarter with the Wallaces, Bryan McMahon and Daithi McGowan leading the charge, and it was level at 0-12 each before before the dramatic conclusion. The Ratoath men will now seek a unique double when they take on Trim in the hurling decider next Sunday.