Hit the road Jack: O’Connor has the drive for Kildare challenge 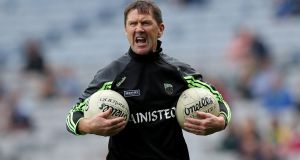 From Jack O’Connor’s home at St Finian’s Bay in south Kerry, overlooking the Atlantic, to Kildare’s Hawkfield training base outside Newbridge is a 645km, eight-hour round trip. Provided the traffic isn’t heavy.

“I don’t mind the driving, I kind of relax in the car if anything,” said O’Connor, channelling his inner Mick O’Dwyer.

The pair, both All-Ireland-winning Kerry managers, have a little bit more in common now following O’Connor’s decision to take on the Lilywhites role.

Like is the case for O’Connor, Kildare was the first county O’Dwyer managed outside of Kerry, and he brought them to the brink of All-Ireland success in 1998.

A little over 20 years on, the road even to Leinster success looks to be blocked for O’Connor and Kildare by the big blue juggernaut from up the M7.

“It’s hard to know,” said O’Connor. “I think the ultimate aim for everyone is to try to get to the Super 8s, no matter what the route is. Sometimes it suits you to go through the back door because you get a couple of extra games. Look, the first priority will be to try to do well in the league and to get promoted. That would be key long-term, because you have to be trying to play against those teams on a consistent basis.”

Dublin, who have won 14 out of the last 15 Leinster titles, will push for a provincial 10-in-a-row next year, though as five-in-a-row All-Ireland winners their shadow now casts out well beyond the province.

“They certainly have [cast a shadow] over the last few years, they’ve frightened off a lot of teams, haven’t they?” said O’Connor. “You just have to keep the faith and be confident that one day they’ll slip a bit and make it a more level playing field for everyone.

“Listen, it’s hard to see it happening at the moment because the age profile in their team is pretty young. Jim Gavin has done a great job of introducing new players every year to keep that age profile down. It’s up to other teams to try to raise their level and to get up there to compete.”

Rewind back to July of 2017 and the Leinster final against Dublin and it all looked pretty good for Kildare under Cian O’Neill. They endured a terrible start, falling 2-4 to 0-1 down, but matched Dublin score for score for the remaining 50 minutes or so. With ex-professionals Kevin Feely, Daniel Flynn and Paddy Brophy in their team, they looked to have an outside shot at seriously challenging Dublin in the coming years.

Remarkably, they would go on to lose their next nine games, in the league and championship, and would close out the 2018 championship with three defeats in the Super 8s.

This year, they didn’t win back to back games at any stage in the league or championship and, in total, have won just 10 of the 30 games they’ve played from the 2017 Leinster semi-final onwards.

Flynn, an All-Star nominee in 2017 and 2018, opted out entirely for 2019, as Kildare finished in the mid-table in Division 2 and bowed out of the qualifiers in Round 3.

“They have shown glimpses of promise over the past few years,” said O’Connor. “Even down in Killarney last year in the Super 8s, they played very well for the first 20 minutes. They have shown glimpses of that promise in the last couple of years, it’s just a matter of trying to get consistency. But I think to get that consistency you have to train and get a panel that are used to playing together and create that bit of chemistry . . . I think Kildare probably had too many injuries and too many fellas missing to really be consistent enough.”

O’Connor’s journey in Kildare is partly a personal one. He played for a Leixlip-Celbridge combination as a teenager while studying at Maynooth, and his sons Éanna and Cian were recent county title winners with Moorefield. Truth be told, having recently retired, he’d planned to take a year away from management until Kildare contacted him.

“I honestly did intend on taking time out,” he said. “But the fact that the lads are up here made it that bit easier. I’d be coming up to see them anyway fairly regularly. That certainly was a factor, yeah.”