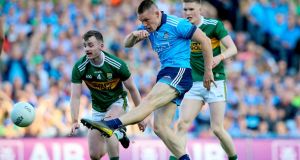 After 135 years of waiting, an extra 13 days to complete football’s first five-in-a-row probably should not have bothered Con O’Callaghan.

He’s not exactly complaining, but if he’s honest he would have preferred to have completed the job as planned on September 1st with Dublin.

“There were 10 of us supposed to go to Berlin to a music festival but that didn’t happen,” said O’Callaghan. “Scully, Jack, Mannion, Paddy Small, Evan Comerford, Sean Bugler, yeah, plenty of us. It would have been some craic. I suppose we’ve made up for it since!”

In light of his lost holiday O’Callaghan could hardly be blamed for celebrating Saturday’s All-Ireland final replay win over Kerry on into Sunday, Monday, Tuesday, Wednesday...and even some of Thursday.

“We finished the celebrations on Wednesday night. There was only about seven or eight of us at that stage who made it out, up to the Blue Light pub and then into Xico’s so we are recovering today and resetting for the weekend.”

A talented dual player, O’Callaghan will be back at it with the Cuala hurlers on Sunday when they play Kilmacud Crokes in the quarter-finals of the county championship.

The short turnaround is why he almost laughed at the suggestion that he might have been able to reschedule the trip to Germany.

“No, I can’t really, I’m back to the reality of it now. Back to the master’s and back to reality,” said the forward who is studying for a master’s degree in accounting.

Outside of his studies the GAA commands virtually all of O’Callaghan’s time. At one stage early last year, after winning the Sigerson Cup with UCD, he had played in 25 major games for club, college and county in just over 12 months, winning 24 of them. Weeks later he helped Cuala to retain their All-Ireland club hurling title, also after a replay.

Life inevitably slowed down for King Con when the south Dublin club failed to retain their county title in the autumn of 2018, though only to a brisk pace.

It was he who opened the scoring just 16 seconds into last weekend’s All-Ireland final replay, finishing the day with 0-4 and his fourth All-Ireland senior medal.

“There’s challenges there at different times, particularly if things aren’t going well for you or if you feel they’re not going well, it can be pretty challenging,” he said of his schedule. “It obviously helps if you’re successful, and I’ve been lucky with injuries. I just take it all as it comes.”

O’Callaghan was in Dublin on Thursday to belatedly collect his PwC GAA/GPA Player of the Month award for August. He was surely in the running for the September award too, given his performance last weekend in the win over Kerry, though the Kingdom’s Sean O’Shea scooped that one.

It is a different Con these days; his body bulkier and more muscular, his hair trimmed to a buzz cut that screams of ambition and aggression.

At one stage during the summer a couple of photos circulated on social media of him; one a youthful Con with the blue jersey hanging loosely over his frame, the other of the current Con, filling out every inch of the jersey.

“I think I was only 19 in the first photo. I was a young lad coming into the team. I’ve had four years of good gym work with Bryan Cullen, under Bryan’s charge. I was a bit heavier during the league, I put on quite a lot of weight during the league, and then the Championship comes around and you lose that with more running, playing more matches.”

The new and improved Con is an animal in the air, powerful in the tackle and dynamic with ball in hand, running at defenders. He didn’t quite display all of those characteristics in the drawn final earlier this month, but managed to cut loose in the replay.

“We probably hit the ground running in the replay,” said O’Callaghan, sibling of Dublin hurler Cian and son of ex-Dublin and Westmeath player Maurice.

“Was there anything in particular I did different? Probably not. I was probably very high up in the first game, didn’t get on as much ball. I was kind of stuck inside, and just didn’t get as much ball as I would have wanted.

“In the second game it was more of an open game, and I was getting on more ball, and just said I’d go at my man hard every time I got the ball. Sometimes when you’re playing against a sweeper it’s easy to go into that process of going around in circles. But I just said that every time I get the ball I’m going to drive at my man.”

Still only 23, O’Callaghan is all about the future and what is to come. Even if he had time to sit back and reflect on his achievements, he wouldn’t want to.

There is talk that Jim Gavin could walk away, and that a number of veteran players may retire too, possibly even Stephen Cluxton, though O’Callaghan’s mindset is pretty simple. It’s business as usual.

“That is absolutely Jim’s decision,” said O’Callaghan of Gavin. “All the players love playing for him, but that will be his decision. I don’t know any more. There has been a lot of talk in the media but as far as we are concerned it is the same as usual – celebrate in the next couple of months, reconvene come December, and figure out a plan.”

1 Nicholas Quinn: ‘Swimming became how I dealt with grief’
2 James McClean still failing to learn his own online history lesson
3 Ian McKinley: ‘You do take for granted the simple things in life’
4 A beautiful, happy accident - Moneyball is the best sports movie ever
5 Reality Bites – Tales from the new normal: Caitríona Cormican
Real news has value SUBSCRIBE