Wexford confirm Davy Fitzgerald will stay on as manager 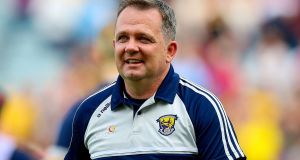 Wexford GAA have announced that Davy Fitzgerald is to stay on as manager. Photo: Tommy Dickson/Inpho

Davy Fitzgerald is to continue as Wexford senior hurling manager for a further two years, despite some speculation linking him with the vacant Galway position and also his own concerns over the distance being travelled from his native Clare.

Fitzgerald had completed his third season as Wexford hurling manager, guiding them to a first Leinster title since 2004, beating Kilkenny, before narrowly losing out in the All-Ireland semi-finals to eventual winners Tipperary.

There was however some doubt about his intentions to continue, Fitzgerald telling Midwest Radio earlier this week that his “heart is torn”, but only given the considerable distance between his native Clare and Wexford. “Listen, my heart is torn,” he said. “I think people appreciate it’s a massive long drive down to Wexford.”

He insisted there was never any formal contact with the Galway county board concerning their vacant hurling management position: however earlier this week betting was suspended on him replacing 2017 All-Ireland hurling winning manager Micheál Donoghue who stepped down on August 20th, despite originally agreeing a two-year extension, and Galway have been on the hunt for a replacement ever since.

However after talking with Wexford officials on Thursday evening, Fitzgerald is now committed to Wexford for another two seasons. In a statement, the Wexford county board confirmed his two-year extension and recognised the progress already made during his three years to date: “We are delighted to announce that Davy Fitzgerald is reappointed on a two year term as our senior hurling manager. Great progress has been made under his direction and we look forward to the journey ahead.”

Fitzgerald, the former Clare and Waterford, had previously admitted he was very close to leaving the Wexford position at the end of last season, only for the players to convince him to stay on.

The Galway county board had extended the deadline for nominations for their new senior hurling manager until this Friday: with Fitzgerald staying in Wexford, the attention turns to other potential candidates, including former Clare and Dublin manager Anthony Daly, and current Galway manager Brian Hanley, who in August completed the three in-a-row, which had previously eluded them, by comprehensively beating Kilkenny in the final at Croke Park.

Former player Jeffrey Lynskey previously guided Galway to three minor All-Irelands in four years, before being succeeded by Hanley, and is also being considered a contender for the position, as is Francis Forde, who this week was backed down from 16/1 to 5/1 and Noel Larkin (20/1 to 5/1).

Elsewhere, following the completion of his two-year term as Tipperary under-20/21 hurling manager, Liam Cahill has decided not to seek an extension to his tenure and steps away after a hugely successful spell in charge. Since 2015, as manager to Tipperary under-20/21 and minor panels, he has led Tipperary to four All-Ireland finals winning three, including this year’s inaugural under-20 title. Cahill has been linked with the vacant Waterford senior job.