Fitzgerald has yet to commit to Wexford for 2020; Anthony Daly also a potential candidate 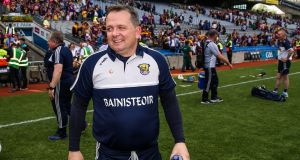 Davy Fitzgerald has yet to commit to the Wexford hurling job for 2020 as speculation continues linking him to the Galway job. Photograph: Gary Carr/Inpho

The Galway county board have extended the deadline for nominations for their new senior hurling manager amid enduring speculation linking Davy Fitzgerald with the vacant position.

Both their hurling and football positions have been vacant since before the end of the championship and Friday is now the deadline for final submissions: 2017 All-Ireland hurling winning manager Micheál Donoghue stepped down on August 20th, despite originally agreeing a two-year extension, and Galway have been on the hunt for a replacement ever since.

County chairman Pat Kearney said at the time they hoped to have the position filled by the start of October, but that process may well run later into the month.

Fitzgerald has completed his third season as Wexford hurling manager, guiding them to a first Leinster title since 2004, beating Kilkenny, before narrowly losing out in the All-Ireland semi-finals to eventual winners Tipperary. The former Clare and Waterford manager has yet to commit to a fourth season, however, despite Wexford’s desire for him to remain.

In the meantime several other potential candidates have emerged, including former Clare and Dublin manager Anthony Daly, and current Galway minor manager Brian Hanley, who in August completed the three in-a-row, which had previously eluded them, by comprehensively beating Kilkenny in the final at Croke Park. Former player Jeffrey Lynskey previously guided Galway to three minor All-Irelands in four years, before being succeeded by Hanley, and is also being considered a contender for the position.

Wexford have since confirmed the appointment of Kerry All-Ireland winner Paul Galvin as their next senior football manager, but they haven’t yet reached any agreement with Fitzgerald for 2020; the long commute from his native Clare likely to factor into his decision.

Kevin Walsh also stepped down as Galway football manager on September 3rd after five seasons in charge, with former Mayo manager Stephen Rochford emerging as a possible replacement, before committing to Donegal for another year, where he is currently in the backroom team of manager Declan Bonner.

The Waterford county board are much closer to confirming their replacement for hurling manager Páraic Fanning, who stepped down after just one season in charge, with former county player and selector Peter Queally expected to be confirmed as their preferred choice by the end of the week.

Queally has previously managed the Passage club to a Waterford hurling title in 2013, and was part of Fitzgerald’s backroom team as Waterford manager in 2008. His backroom is likely to include another former player and selector Dan Shanahan.

Wicklow are also expected to fill their vacant football manager position before the end of the week, with former Kildare under-20 manager Davy Burke in line to take over from John Evans. Burke has also managed Kildare club Sarsfields, and at 31 would become the youngest manager in the senior intercounty game.