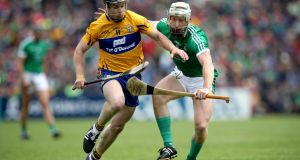 It’s a Munster hurling quarter-final, doubling as the league final, with a second chance for whoever loses, and Tony Kelly and Cian Lynch agree on one thing: they’ll be playing it as if it’s their last game.

Such was the uncertainty over any further intercounty matches in the face of the Level 5 restrictions around Covid-19 announced on Monday evening, they’re mutually grateful the meeting of Clare and Limerick is still happening in Thurles on Sunday. Crowd or no crowd, days like this suddenly feel heaven sent.

For Kelly, the 2013 hurler of the year when Clare last won the All-Ireland, the offer of a league trophy is a nice bonus and there is still that back-door route too. Only now more than ever there’s no looking beyond the horizon.

“We’ve gone from great optimism about two weeks ago, then it started to dwindle, to it being on, but our approach all along was that it is going ahead,” he says. “If you have any doubts that’s when the standards start to slip, and you’ll be found out. You just have to block it out, completely.

“Things could change again next week, we could be sitting here saying the championship is off, which to be honest is a bit of a plus, because you really aren’t looking too far ahead, solely on your next game, Limerick this weekend. And the way I’ll be approaching is to take it as if it is your last game of the year, literally go out and give it everything you have, which is the best way to approach a game anyway.

“The way we’ve been approaching it, it’s a Munster quarter-final, but there is that national trophy at stake as well, that’s an added bonus. And we’re training as hard as ever, every night, but winning on Sunday is just that first step to whatever comes next.”

Especially for the mindset and the mental health of people, it’s a massive outlet to have, and for me as a player it is great to be able to get out, and for our families and the ordinary Joe Soap who loves hurling too

It’s a similar approach for Lynch, who like Kelly earned a hurler of the year award after Limerick won the All-Ireland in 2018. He is still only 24 and in his sixth championship season, he feels particularly appreciative just to have one game to look forward to for now.

“I’m grateful really,” said Lynch, both players speaking at a promotion for championship sponsors Littlewoods Ireland. “Especially for the mindset and the mental health of people, it’s a massive outlet to have, and for me as a player it is great to be able to get out, and for our families and the ordinary Joe Soap who loves hurling too.

“People can’t go to games but still this brings joy to people’s lives, it brings a bit of happiness and that positive energy that people need so we are definitely grateful.

“There were three months there where we did absolutely nothing, and that’s when you really realised you were missing something, being part of a team, a group. It’s very hard to go off on a run on your own, and just mentally acquit yourself. When you’ve someone beside you, it’s a lot easier to push yourself over that limit.”

It was the 2015 Munster quarter-final where Lynch made his championship debut against Clare, scoring 0-3 and was named man-of-the-match: a year ago he was questioning how much greater the inter-county commitment could get, only now it’s a different matter.

“It’s definitely more appreciated now, that every week is a blessing if you can just get out and play. For us just being back training, everything is being done right, and you feel safe when you do things right. It’s about accountability really. Obviously no one knows where a case might arise, but you just have to look after yourself, and your set up.”

“Normally there would be five of us in car, coming from Patrickswell, going to training and matches, and there would be a good old buzz, that’s gone, but again you’re just grateful to be outdoors, and it’s all put in perspective, and how much we did miss things. So it is a massive boost for the players, to be able to get out, but you do feel you’re maybe helping people as well. I see it with my family there, haven’t been to a match for so long, are looking forward to watching in on the game now.”

Clare are down several players, including John Conlon (injured) and Podge Collins (playing football), and Peter Duggan (travelling), although Aaron Cunningham and Aron Shanagher are expected to feature in the forwards along with Shane O’Donnell.

Kelly, a teacher at St Flannan’s in Ennis with 1,200 students and 80 staff, is well used to the restrictions and precautions and believes the Government and the GAA made the right call. “I think once it’s done safely and we’ve no hiccups along the way, people will come around to seeing it may have been the right call to let it go ahead.

“Even within your own community, people are asking ‘will it go ahead, won’t it’, and there’s definitely a portion of the population that haven’t much left, they can’t go to the pub, but they can sit at home and watch the match. Before this weekend I was watching soccer and American football, and this Sunday I watched three (Gaelic) football matches, so I think it will give some people a lift.”