It’s two steps forward, then another step, for John Sugrue and Laois

The Leinster title seems to be drifting away, but the manager is not giving up the chase 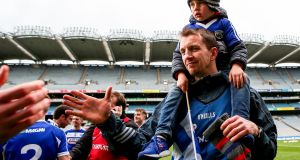 In the now-15 years since Laois last won the Leinster football title, managers have come and gone, and gone and come. Seven times to be exact. Along with that merry-go-round, their prospects of winning back the title have been drifting further away.

John Sugrue doesn’t necessarily see it that way. The south Kerry man knew exactly what he was letting himself in for when taking over as manager last year. And even if Dublin appear miles ahead of the rest, where’s the fun in giving up the chase?

Being the third Kerry man to take over after Mick O’Dwyer stepped down in 2006, three years after guiding Laois to the title, may not be a great omen either: Liam Kearns and later Tomás Ó Flatharta held the position, and also Seán Dempsey and Justin McNulty, before Mick Lillis and Peter Creedon – both of whom lasted only one season.

Living and working in Laois for the last eight years, with his physiotherapy business in the heart of Portlaoise, Sugrue was never too far from the occasionally disheartening tales of Laois football.

“You’d hear it all right, the good, the bad and the ugly,” he said. “But I was involved with Laois before, as a physio, and saw maybe the guys just needed a little bit of structure in how they played, a little bit of consistency with regard to delivery.

“We just have to see where this group of Laois footballers can go in year one, but I think there is a need for a new energy in the county, and how to get the best of players, and we have to generate that. It has been a merry-go-round, and God only knows I might have only six weeks left in this job, given the recent history of how managers have come and gone. But hopefully the players are getting some consistency in our campaign so far.”

Their first-round win over Wexford, coming back from 10 points down at half-time, may not have been their most consistent, but displayed some of the bite perhaps absent in Laois teams in recent years. Next up is Sunday’s Leinster quarter-final against Westmeath, who last won the Leinster title in 2004, a year after Laois’s win, Meath being the only other county to deny Dublin the title in the years since, back in 2010.

Despite the apparent gulf in class between Dublin and the rest, Sugrue is still optimistic about the state of football in the province. “The Dublin thing is difficult to measure. They do have a particularly strong group of players at the moment, strong characters, strong athletes, strong ability to kick the ball, strong ability to do everything with the ball. And they seem to have their house rightly in order.

“It depends on how long that form lasts, but I don’t think anyone can sit back and wait for them to come down off their perch. You’ve got to go after them. Has it closed this year? Not necessarily. But we’ve got to improve ourselves. We started in Division Four, gladly got ourselves out of there, but we can’t lose sight of where we’ve come from. The Dublin situation is not in our realm at the moment, but if we can take a step or two forward, then another step . . .

“And there is a competitive Leinster championship there, believe it or not. If you look back at last year, a lot of high-scoring games, nicely competitive, in a standalone sense. The Leinster championship is still special, gives you that local sense, and if you just go for the big brand scenario, you lose that sense of locality, and identity too.”

Sugrue also brought some considerable football pedigree to the Laois job: he was trainer with the Kerry team that won the 2007 All-Ireland, also playing with South Kerry when winning four county titles, and later managed them to the county title in 2015. With Ross Munnelly the sole survivor of that 2003 success, the injection of younger players has already paid off with promotion from Division Four, having dropped through all four divisions in the six years before, Sugrue clearly having both a stabilising and progressive effect.

Sunday’s game is also the first meeting between the counties since 2004, when Westmeath, managed by the late Páidí Ó Sé, took their title after a replay. After heavy defeats to Kildare in Leinster last year, then Clare in the qualifiers, Laois winning two games in Leinster would represent further progress.

Waterford’s Pauric Mahony and Austin Gleeson are set to miss their opening game of the Munster round-robin hurling championship against Clare on Sunday because of injury.

Gleeson has been beset with injury since the start of the year, including back, quad and ankle problems, and also sustained a hamstring injury when playing for his club Mount Sion last month.

Mahony had also been nursing a hand injury, and the loss of both players represents a setback for manager Derek McGrath as they set out on the campaign. Clare have home advantage in Cusack Park, and went down narrowly to Cork in their first game last Sunday.

1 Saracens’ emphatic opening salvo enough to keep Leinster at bay
2 Next stop the Champs-Elysées in green for Sam Bennett
3 Born to ride, born to win: Sam Bennett, the making of a green machine
4 Maro Itoje proves he has no peer in the northern hemisphere
5 Garry Ringrose: Leinster’s defeat to Saracens is ‘heartbeaking’
Real news has value SUBSCRIBE