GAA weekend that was: fans flocking in for reformed championship

Offaly improvement could cause problems, McGeeney happier on the national stage 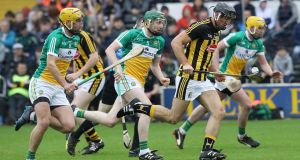 Reform it and they will come

A couple of weekends into the radical departure of the round robins in the Munster and Leinster hurling championships, the impression is fairly positive. There have been three rounds so far, four matches in Leinster and two in Munster and perhaps surprisingly, the attendances haven’t diverged enormously from comparable numbers under the old sudden-death formats.

* On double bill with Dublin-Limerick

This means that over 12 matches there has been a drop of 14,407 in crowds attending. Given that there are 40 fixtures in the round-robin format – five times as many as in last year’s provincial championships – the provincial councils look as if they will have reason to be happy when the books are complete at the end of the season.

In relation to the comparisons, Cork and Clare met in last year’s Munster final and drew a crowd of 45,556 to Thurles but provincial finals are separate fixtures and will be taking place this year as well – so, the more equivalent fixture was judged to be their previous match, in the 2015 All-Ireland qualifiers, also in Semple Stadium.

One of the fixtures to date this year – Offaly-Galway – actually drew a larger crowd than last year when played under the old knock-out system. This is accounted for by the rise in Offaly’s fortunes this year under Kevin Martin, which has evidently inspired a revival amongst supporters.

Figures have also yet to take into account the impact of dead rubbers towards the end of the schedules although the levels of competition would suggest that such outcomes may be kept to a minimum.

Offaly’s improvement will also cause problems for the GAA. When Leinster opted for a five-county – rather than six-county – round-robin format, after consultation with Laois, the perception was that Offaly would finish this season bottom of the heap in the province.

At that stage the view was clearly that the county had more in common with the McDonagh Cup sides – Antrim, Carlow, Kerry, Laois, Meath and Westmeath – than with those in the elite MacCarthy Cup. Accordingly, the format in Leinster provides for automatic relegation and promotion for the McDonagh Cup winners apart from Kerry, who would have to play off against the fifth-place team in Munster.

This disparity in the treatment of the provinces has begun to attract criticism, including from Kilkenny manager Brian Cody and former Tipperary All-Ireland winning captain Eoin Kelly.

Offaly’s solid displays this year and especially in the championship – their nine-point defeat by Kilkenny on Sunday has to be seen in the context of an average losing margin of 15 in the years since they last defeated Kilkenny in 1998 – will contribute to further uproar if they finish last in the table.

Were Dublin – seen as the most likely alternatives to Offaly for relegation – to occupy that position it would be extraordinary given that just five years ago they were Leinster champions.

A potential solution would be to dispense with relegation and expand the province to six teams for next year but that might require a special congress.

McGeeney happier on the national stage

Saturday’s defeat by Fermanagh meant that Armagh have yet to win a single provincial championship match since Kieran McGeeney took over as manager of the county. The record is an extreme version of McGeeney’s when in charge of Kildare for six years in Leinster, when the county was twice beaten in the first round, reached only one final and barely broke even in provincial fixtures (seven out of 13).

The peculiar thing about McGeeney’s role with both counties is that his record outside of the provinces is quite impressive. Having been the fall guys for Wicklow’s first championship success in Croke Park 10 years ago, Kildare went on to reach the All-Ireland quarter-finals for the first time and under McGeeney they qualified for the last eight on five out of six occasions – which would be a highly-sought-after rate in these days of the Super 8s.

Armagh haven’t hit those sort of targets but last year they reached the last-eight despite being a Division Three team and for only the second time since they stopped winning Ulster 10 years ago.

Overall, McGeeney’s championship wins in the provinces come in at a paltry 41 per cent but in the All-Ireland stages of the championship, they stand at a reputable 67 per cent – with this year yet to come.

Monaghan’s achievements have been attracting attention for a number of years and the county has become a poster child for good husbandry of resources (population 61,386 in the 2016 census). This has come into focus during Malachy O’Rourke’s term as manager, which has featured two Ulster titles in a decade for only the second time since the 1930s.

A further indicator of the county’s consistent competitiveness is their record in taking down champions from the previous year. Sunday was another example, as they defeated Ulster holders Tyrone in Omagh.

Even before O’Rourke’s time it happened. With Meath’s Colm Coyle in charge, Monaghan created a sensation in 2003 by defeating Ulster and All-Ireland champions Armagh on the first day of the championship.