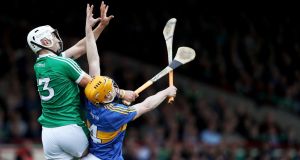 The biggest GAA weekend of the championship to date drew the crowds and provided plenty of talking points. Munster’s hurling championship, held sacred by tradition throughout its history, embarked on a newfangled era on Sunday with its first series of round-robin matches in the new format.

Day one turned out to be a success with more than 45,000 turning out between Limerick and Cork, as the provincial matches got under way with wins for the home sides.

In the Gaelic Grounds, Limerick produced another full-blooded display from the catalogue that has discomfited Tipperary down the years and inflicted on the 2016 All-Ireland champions their heaviest defeat in this fixture, 1-23 to 2-14, since 1981.

For manager John Kiely, it confirmed that his emerging team’s trajectory is on the right course after promotion to the top flight during the league but he was anxious that it be taken in context.

“This is our first championship win with this group. That’s a significant milestone in itself. The challenge is there now to build on that. They hunger is definitely there within this group. We have three games left in the round robin – let’s go and see what we can do with those games.”

He felt that the clearing of April for club activity had worked to his team’s benefit.

“The lads going back to the clubs for the two weeks, was key. We took a break from each other. It gave them a chance to switch off.”

In a match that stayed on a tight leash on the scoreboard with minimal movement either way, it looked for a while as if Tipperary’s superior finishing would carry the day after two goals in either half stalled Limerick’s momentum.

Yet it was a barrage of scores from the winners in the closing 10 minutes that put the match away and Kiely paid tribute to his defence, which shut down their opponents in the decisive endgame.

Centre back Declan Hannon, who had a fine match for Limerick, paid tribute to the impact of the bench.

“There is a good desire there from the boys and the lads who came on made a massive difference. I remember Paul Browne made a serious interception there on John McGrath who was bearing down on goal. If that went in, Tipp probably would have pumped the ball in for the last few minutes and you’d never know. That interception and Barry Murphy’s goal from the subs were huge.”

Tipperary manager Michael Ryan declined to talk afterwards, apparently because he doesn’t want to be interviewed during the round-robin fixtures. County chair John Devane did his best to explain to media.

Meanwhile in Páirc Uí Chaoimh, where Cork were playing their first championship match since the redevelopment, another thriller saw the home side prevail 2-23 to 1-21 despite Clare drawing level a couple of minutes into an extensive injury-time – reflecting the nine-minute stoppage to treat an injury to Robbie O’Flynn, later said by manager John Meyler to be suspected concussion in a collision with team-mate Conor Lehane.

“When Robbie got injured I was a bit rattled because I was involved,” said Lehane afterwards.

“It was awful to see him down. But you have to regroup and say, ‘nothing is going to change now’. Thank God he is okay. I didn’t see him coming at all. I just put the hurley out to the ball. I felt a smack. I didn’t hear him coming. Neither of us called it to be fair. I was a bit rattled; I think David McInerney was involved as well and unfortunately Robbie came out the worst of it.”

In the end a late goal by Séamus Harnedy sealed the victory.

In Leinster, for the second week running Dublin’s hurlers were beaten in injury-time. Having fallen agonisingly short against Kilkenny at Parnell Park in week one of the Leinster championship, Pat Gilroy’s team were clipped in Innovate Wexford Park, courtesy of late points by Rory O’Connor and Harry Kehoe.

The big football match was in Omagh where Monaghan dethroned Ulster champions Tyrone, 1-18 to 1-16. A goal from Vinny Corey before half-time pushed the visitors in front and they kept ahead on the scoreboard during a tense second half. Michael McKernan’s injury-time goal came too late in the day to affect the outcome.

“Coming down we were confident,” was the reaction of manager Malachy O’Rourke afterwards, “and we knew that if we gave our best display that we would be in with a good chance and that’s the way it turned out. It was by no means perfect. There was a spell there towards the end where we sort of let Tyrone into their stride again but we kept our composure and finished the job and we are delighted with that.”

1 Six Nations - Ireland v Italy: Kick-off time, TV details, team news, standings and more
2 Dan Leavy gets back in the thick of things as Leinster trounce Zebre
3 Irish duo set for AFL Grand Final as sport lifts the gloom Down Under
4 Fresh faces and renewed appetite: Is this a new era for Irish rugby?
5 Mike Catt wary of young Italians and excited by Irish debutants
Real news has value SUBSCRIBE