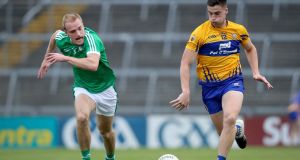 Clare were convincing winners at the Gaelic Grounds as Eoin Cleary’s five points helped them into a Munster football semi-final against Kerry in two weeks’ time.

Five up at the interval, Clare should have been much further ahead considering their early dominance, but after Limerick closed to within a goal of their visitors, Clare surged clear in the final quarter as Eimhin Courtney and substitute Conor Finucane saw them to a fifth straight win over Limerick in the championship.

Eoin Cleary curled over a lovely score after three minutes to start the scoring, and his forward colleagues Keelan Sexton and David Tubridy soon matched his tally to make it 0-3 to 0-0 after five minutes.

A foul on Jamie Lee allowed Seán McSweeney to get Limerick on the board, but Clare’s response was emphatic as Pearse Lillis, Jamie Malone and Cleary all found the target again – and only a great save from Donal O’Sullivan denied Kieran Malone a goal.

But the Limerick defence was being carved open too easily, and after 18 minutes Kieran Malone exchanged passes with Jamie Malone, and Kieran found the net after his initial effort was well saved by O’Sullivan.

Limerick responded with a couple of good scores as Lee and Danny Neville hit a couple of scores to trim the gap to six points but a great stop from Eamonn Tubridy halted Limerick’s run five minutes from the break, as points from Kieran Malone and David Tubridy, put Clare 1-9 to 0-7 ahead at half-time.

A couple of early frees gave Limerick real hope, but Clare finally found their feet again after 13 barren minutes. Courtney landed a great score, which was followed by four more unanswered points for Clare, who cantered to a 12-point win.