Minor hurling round-up: Kilkenny turn on the heat against Wexford

Meanwhile, Dublin saw off Laois and Limerick came back against Tipperary 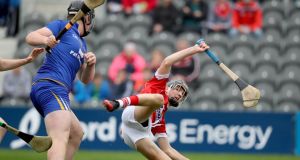 Dublin bounced back impressively from last week’s defeat to Kilkenny when easing past Laois by 2-21 to 0-7 in their Electric Ireland Leinster MHC encounter in O’Moore Park on Saturday afternoon.

Adam Kirwan offered early hope to the hosts with three scores from placed balls but Dublin began to exert themselves in the second quarter and after Luke Swan, Conor Murray and Ciaran Foley had all pointed, Dara Purcell fired home in the 24th minute from a Pearce Christie pass to put daylight between the teams.

Leading by 1-10 to 0-5 at the break, the visitors pushed on through five unanswered points from Liam Dunne and the Raheny player effectively settled the issue as he netted in the 48th minute.

It proved similarly straightforward in Nowlan Park as Kilkenny turned on the heat after the break to pull away from Wexford on a 3-21 to 1-12 scoreline.

The free-taking of Wexford’s AJ Redmond helped ensure parity at 0-9 apiece by the turnaround but a goal from Eoin Guilfoyle in the 35th minute proved a body blow from which they never truly recovered.

George Murphy scored Kilkenny’s second goal at the end of the third quarter and as Guilfoyle and David Cantwell exchanged goals late on, the impressive Conor Kelly finished the game with seven points to his name.

Elsewhere in Leinster, goals from Danny Flanagan, Cathal Kiely and Cillian Simpson helped Offaly beat Kildare 3-19 to 0-14 while Antrim and Westmeath enjoyed victories over Meath and Down respectively.

On Sunday, Limerick completed an impressive comeback to edge Tipperary by 1-17 to 2-12 in their Munster MHC clash at the Gaelic Grounds.

A brace of goals from Sean Hayes handed the visitors a healthy lead with twelve minutes remaining but a Cormac Ryan goal and ten points in total from Cathal O’Neill saw Limerick home while at Páirc Uí Chaoimh, Cork narrowly defeated Clare by 0-26 to 3-13.