Dublin's Fitzsimons taking nothing for granted 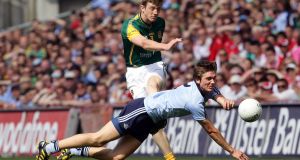 Dublin’s Michael Fitzsimons tries to block an effort from Meath’s Kevin Reilly during the 2010 Leinster semi-final which Meath won 5-9 to 0-13. It was Dublin’s last defeat in Leinster. Photograph: Cathal Noonan/Inpho

Once upon a time in a championship far, far away there was a Dublin football team that lost a match in Leinster. Not everyone will recollect it, or indeed believe it, but even after eight years Michael Fitzsimons gives the sense he will never forget it.

“I remember it vividly,” says Fitzsimons, one of the few members of that Dublin team still on the panel. The memory is intact because that defeat was as unexpected then as it might be now, and gently reminds Fitzsimons to guard against any sense of complacency.

It was the 2010 semi-final against Meath and, having won the previous five Leinster titles in succession, Dublin looked poised to make it six. Instead Meath hit them were it hurts and won 5-9 to 0-13, Cian Ward, who Fitzsimons was giving the task of marking, finished with 1-4.

“That was my first year on the panel, and Dublin won what, five before that? But I certainly wasn’t going in thinking Leinster was a foregone conclusion, and we got a great lesson from Meath that day, learnt a huge amount from it.

“And lads know there have been some Leinster games where we underperformed through the years and were lucky to get through, and I think lads are still aware of that, and push hard not for that to happen.”

Then manager Pat Gilroy didn’t flinch, however. Philly McMahon is the only survivor of that 2010 defence (Rory O’Carroll, Barry Cahill, Bryan Cullen and Ger Brennan have since moved on), and the following year Fitzsimons and Dublin were All-Ireland champions. By then Fitzsimons was first-choice corner back, starting that 2011 final against Kerry as he became the first Cuala player to start an All-Ireland for Dublin since the late Mick Holden in 1983.

“Yeah, fortunately that full back line got a good bit of backing off Pat, because it could have been a haunting affair. But you don’t dwell on it too much, think back to specific games.”

It hasn’t been all smooth sailing for Fitzsimons in the eight years since that semi-final defeat, and while Dublin are now seeking an eighth successive Leinster title when they start their campaign on Wicklow on Sunday, the Cuala man missed out on a few of those wins.

By 2012 he had lost his place, initially through injury, and then when Jim Gavin took over from Gilroy he needed to earn his place all over again, and didn’t feature at all in the 2013 All-Ireland win. The only game Fitzsimons started for Dublin in 2016 was the replayed All-Ireland final win over Mayo, taking over from Davy Byrne at corner-back, where he seized the day with such ferocious enthusiasm he ended up man of the match.

He’d come off the bench in their six championship matches up to that point, patiently biding his time until the ultimate chance to shine.

“Initially I was injured, and took two months out,” he recalls. “But like every year, new lads come in, and pushing for places, and maybe I had fallen back a bit, in terms of consistency, and was putting a lot of pressure on myself. And you’d end up risking things a bit too much, because you are pushing it. I think now I’m sticking more to what I do best. Just fine-tuning, rather than drastic changes.

“There is massive competition, and again that sounds like a cliché, but no one takes their place for granted. It’s a healthy level of stress, as long as it keeps you performing, and you don’t break down under it. It’s about keeping the standard, and that sets it for the whole team.”

There are other reasons perhaps why Fitzsimons is so resistant to any complacency. Now 30, nothing about his early career came easy. He was no minor or under-21 standout, instead coming up through the junior football ranks.

He’s taken on other challenges since, defying the myth that most of the Dublin footballers are either teachers or lifeguards, by returning to study medicine in UCD, now in his final year. Jack McCaffrey and Cillian O’Shea, of Kilmacud Crokes are also doing medicine.

“The GPA are quite good with that, Jim, and Pat Gilroy too, to go after a career that was fulfilling for you, not just ticking a box. Bernard [Brogan] Cian [O’Sullivan] and others have busy jobs too. Something you enjoy and that is challenging. Our two managers have been great for that, and Jim is great with the work-life balance.”

Wicklow have never won the Leinster football championship, nor indeed beaten Dublin. It’s 12-0 to Dublin in the championship and 18-0 in the league. There were also 30 places between Dublin and Wicklow in this year’s league, Dublin finishing second in the Division One table (they beat Galway in the final), while Wicklow finished bottom of Division Four.

Nor have Dublin lost a Leinster football quarter-final since going down to Westmeath in 2004. Remember that?

1 Saracens’ emphatic opening salvo enough to keep Leinster at bay
2 Born to ride, born to win: Sam Bennett, the making of a green machine
3 Next stop the Champs-Elysées in green for Sam Bennett
4 Maro Itoje proves he has no peer in the northern hemisphere
5 Garry Ringrose: Leinster’s defeat to Saracens is ‘heartbeaking’
Real news has value SUBSCRIBE