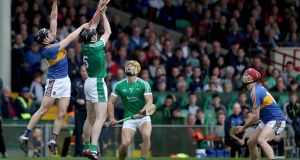 New format, same old relationship: in a match of measured advantages and score-for-score retaliations culminated inevitably in a desperate scramble as the clock ran down Tipperary. For all of their apparent control, which had seen them stay in front for most of the 70 minutes and find critical goals to subdue the home team, they succumbed to the swirling energies of the green and white opposition and ended the first date in Munster’s round-robin championship six points adrift.

The key score was Barry Murphy’s 67th-minute goal, calmly batted down past Brian Hogan in the net. A flurry of attacks on the Limerick goal failed to dislodge even a morsel of encouragement for the favourites in the face of composed defending and in the end nothing was as eloquent as Tipperary manager Michael Ryan’s refusal to talk to the media afterwards. Not for the first time the Gaelic Grounds has silenced a more fancied team from across the border.

It was impressive stuff from John Kiely’s improving young Limerick side, already promoted to Division 1A this spring, and especially so as Jason Forde’s exceptionally well taken goal in the 51st minutes looked not only to have closed the deficit at 0-18 to 2-12 but also to have prompted Tipp to go up a gear.

Limerick’s momentum stalled and just before the hour, Noel McGrath had pushed Tipperary in front. There would have been long odds at that point against the visitors scoring just one further point while conceding 1-5 but that’s what happened.

Amidst the early ebb and flow of a match that for most of the time never strayed beyond the confines of a one-score contest, certain things became clear and none were particularly unexpected.

Limerick had energy and cut to their play but Tipp had economy. Limerick charged around challenging for ball but frequently it was the visitors who got the decisive touch to secure possession. In their excursions up in attack, John Kiely’s men gave abundant evidence that they hadn’t found a fix for their prodigious tendency to shoot wides.

During one astonishing phase half way through the first half, they carved out a sequence of chances but four went a begging when it appeared inevitable that they wouldn’t. Aaron Gillane threw in a fluffed free, supplemented by two from Tom Morrissey and one from Gearóid Hegarty.

If Gillane was suffering from the yips, at the other end Jason Forde brought the assassin calm of his league campaign to bear on all dead ball opportunities.

Both teams had goal chances but whereas Gearóid Hegarty’s acrobatic leap and flick brought a fine save from debutant goalkeeper Brian Hogan in the 17th minute, two minutes later Dan McCormack rammed in the rebound after John McGrath’s shot from a good ball in by Billy McCarthy had been blocked.

It was a tonic for Tipp and pushed them two in front, 1-3 to 0-4, but it also galvanised Limerick, who embarked on a very accurate spell of shooting. Graeme Mulcahy was to the fore, accumulating 0-4 by the break and all from play but others chipped in and they recovered the deficit embarked on a tit-for-tat exchange with their opponents.

Forde’s immaculate free taking left Tipp a point ahead at the interval, 1-10 to 0-12.

Limerick needed to improve their discipline given the concession of frees and they did in the second half – Tipp had also had issues and both John McGrath and Donagh Maher had sailed close to the wind when ending up with yellow cards.

The patterns of the first 35 minutes reasserted themselves but this time Limerick, rather than Tipp were the team more often in front. Their attack exerted pressure and the accuracy of their shooting improved. It wasn’t perfect for the winners and at times they panicked – Hegarty’s conviction on a driving faltering at one point but the resolution never wavered.

Tipp remained sharp: John O’Dwyer cutely dispossessing Richie English for a point and Forde’s goal saw him deftly take down another delivery from McCarthy to tie up the match.

The big-name replacements rolled for Tipperary: Brendan Maher, Séamus Callanan and Patrick Maher but they struggled to impact and it was the Limerick bench that had the bigger impact.

In the five minutes of additional time there was plenty of excitement and both sides were affected by jitters. Limerick had opportunities to take a well-insured lead of seven but hit wides but at the other end, their defenders were calm, earning praise from manager John Kiely for ensuring a first win in the province for three years and a good base from which to launch the rest of their campaign.