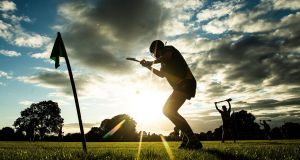 In many regards, it hasn’t been a fun time to be a woman in sport at the minute. We’ve had the WGPA report which stated women are spending up to €200 per week on fuel expenses to play intercounty football, 93 per cent don’t receive anything towards travel expenses, 77 per cent pay for physio, 69 per cent pay for their own gym. We’ve had fixture clashes for dual stars which are causing a headache for both associations and now the Camogie Association are dealing with internal player pressure.

As of two weeks ago, any camogie team with a labelled ‘B’ team were to be removed from all competitions if they had a team representing at the senior grade. Approximately 250 players received a message from management 24 hours before their respective games, their services were no longer needed after months of training and preparation. As expected, the players’ reactions were not positive.

So, on a Friday evening, two Cork intermediate camogie girls reached out wondering would I cover it in this column. Kate O’Keeffe and Katie Walsh are adamant of two things: they are not second-class teams, and the integrity of the competitions are now under threat.

“It is just so disheartening. Like we were meant to take on Kerry, it’d be two Saturdays ago now, and 24 hours before the match, we got the texts saying we have to withdraw from the competition due to the fact we were Cork’s second team. It’s just a massive lack of respect shown to us, especially with the lack of notice,” explains O’Keeffe during our call.

The Camogie Association are quick to stress this wasn’t a decision they wanted to take. It was a decision taken by the powers that be. In a statement, it said: “Unfortunately it was a decision made externally by the Department of Tourism, Culture, Arts, Gaeltacht, Sport and Media aimed at minimising the risks associated with the spread of Covid-19 through sport.

O’Keeffe is quick to stress that although cases were on the up nationally, they were keeping things incredibly tight. “We were following all the guidelines, like hand sanitising, not going into huddles, [not] using dressingrooms. We were doing that, and throughout the session, we were using this and then it was like, we never went into a dressingroom the whole year. We were keeping ourselves apart throughout the session. We were following all guidelines. We had no positive cases.”

As for finding facilities while sides were still going pre-shutdown, O’Keeffe says that the expense put on teams to just get removed from the competition was pointless.

Government Chief Whip & Minister of State for Sport & the Gaeltacht, Jack Chambers and Minister for Tourism, Culture, Arts, Gaeltacht, Sport and Media, Catherine Martin responded to the girls request as follows: “In line with the Government-approved ‘Resilience and Recovery 2020-2021: Plan for Living with COVID-19’ during the period of application of the current Level 5 restrictions all matches and other sporting events must cease. A limited exemption is set out in the public health regulations for certain elite and professional sportspeople and sporting activities, including certain games in camogie, football and hurling.

“In this context, the Government's decision to exempt some Gaelic Games recognises the unique place that the Gaelic Games championships occupy in Irish life. However, given the current epidemiological situation with the disease, which requires the minimisation of both travel and contacts to prevent the spread of the virus, not every competition, team or grade in the sports concerned can be accommodated.

“In normal circumstances, in certain competitions, counties enter teams at different ability levels, but this year, recognising that we are dealing with a global pandemic, this exemption only applies to each county fielding just one team in the All-Ireland competitions for each code – camogie, hurling, Gaelic football and ladies Gaelic football. This requirement means that no county team can play in two competitions nor can counties field a second team in another division or branch of an All-Ireland competition structure.  During the Level 5 restrictions, there can be no scheduled matches other than those that form part of the All-Ireland competition and there can be no practice or training matches other than between players on the panel that form part of the existing team training structure. Once teams are eliminated from the competitions they must thereafter cancel all training sessions.

“The exemption approved by Government applies to a very small number of sports and is also designed to limit the number of teams that will be participating in Gaelic Games competitions. Within the confines of the available exemption, it is a matter for the national governing bodies concerned and their constituent county boards to decide on the actual teams to represent their counties in the championships.”

Walsh says the whole thing from start to finish was a bit of a mess.

“There was just a text from management, but an hour before we had seen the press release from the Camogie Association. The Camogie Association had put up their posts, and everything before our manager even got to talk to us. It was a bit awful seeing it online because I was just in college, and I was in a class online, my mom came in, and she was like: ‘Your championship’s cancelled’ and I was like, ‘What?’ I’d just been telling someone, I was like, ‘I’m looking so forward to tomorrow.’ I can’t believe that we got so close 24 hours a day to have it taken away from us.”

One panel member from another county set up a petition to try and get some momentum behind reversing the decision. That petition was passed on to the Limerick junior panel, the Wexford team, the Galway team while many more involved were liking and sharing it.

Katie Walsh says the appetite for change is needed. “It is good to see that all the teams are coming together because we know it’s wrong and we’re trying to fix this. Obviously, it doesn’t affect the senior team, but 50 per cent of the teams have been taken out of the Intermediate Championship, and 71 per cent of the junior teams have been taken out, now there are only two teams left in the junior. It’ll be a straight final.”

Walsh is firm in what she wants the end decision to be. “The best thing will be that the directive is reversed from the Government, but there’s a maximum of four matches in the Intermediate Championship. Even if it got postponed until after lockdown, after the re-evaluation of restrictions. If they postponed it until then and just got the matches in, we’d be just going to the first week of January, it’s very doable for the Camogie Association to postpone competition as well.”

Both players openly say they will play the championship well into Christmas, and even find the idea novel. Kate O’Keeffe states: “We could play every weekend from now. I’m sure girls on the panel would play during Christmas for that All-Ireland medal, and there’s still time.”

There may still be time, but the uncertainty leading up to Christmas is getting more precarious. While the camogie players just want answers and games, we all know radical changes are needed when it comes to how we live with Covid.