Celtic Park – where the New York Irish once sported and played ... drank and fought

America at Large: The old ground in Long Island City was the scene of an infamous prohibition riot 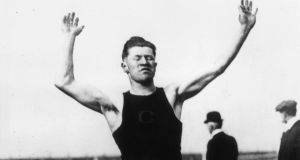 A glorious summer Sunday at Celtic Park, Long Island City. Dust rose underfoot from the baseball diamond, ash splintered on the hurling field and Gaelic footballers thundered into each other.

Wrestlers commandeered their own patch for grappling, cheek by jowl with sprawling family picnics and wheezing runners recovering from races on the track. Music wafted across from the clubhouse where sheiks and flappers threw giddy shapes on the dancefloor.

Bootleggers sidled through the various congregations, all wink and elbow language of recognition, now and then unholstering clandestine flasks of whiskey for men and women desperate to wet their whistles. A portrait of the merry Irish in New York at sport and at play.

But, this particular afternoon in 1922, the throng was also speckled with plainclothes police determined to uphold the prohibition on the sale of liquor and to tamp down any drunken revelry. Spotting James Sullivan handing another man a furtive sip from a naggin before quickly rehousing the contraband in his jacket, Lieutenant Robert McCarthy had seen enough. He moved in to make the first arrest of the shift. As soon as he found himself in the clutches of the NYPD, Sullivan roared something as Gaeilge to alert his confreres. One of his fellow concessionaires then sounded a wider alarm, “The cops have made a pinch! Come on!”

Suddenly, McCarthy and half a dozen more undercover officers were surrounded by an angry mob determined to pry Sullivan from their grasp. All other action ground to an immediate halt. Hurlers sprinted across from their corner of the complex, wielding their sticks that would end up being described by one over-excited newspaper reporter as “wagon spokes”. When McCarthy cautioned the crowd to step back, a man with sweat on his brow and a hurley in hand came forward and slashed him across the back of the head. He went down in stages, staggering, somehow still holding on to the perp.

“Then and there started a free for all fight that has never been equalled in Celtic Park, at any rate,” wrote the New York Herald. “Nobody knew how many policemen were present so the fighting was general. Anybody who happened to be near anybody else received at least a punch in the jaw. In the centre of the fighting mob – it is estimated that at least 1,000 people were actively engaged – lay McCarthy and Sullivan. Friends of the latter had beaten their way to his side, using beer bottles, clubs, bricks and whatever else they found handy and effective.”

The rolling maul endured for a bloody hour, long enough for police reinforcements to pile into the park from all over Queens. Mounted patrolman Robert Farrell rode into the fray, ordering the crowd to disperse until a flying brick to the head knocked him clean off his horse. Officer John Bell fired a warning shot in the air that prompted retaliatory gunfire and he took a bullet in the lower back. Among three other wounded in the crossfire were William Callopey (arrested in his hospital bed when one of the cops recognised him), Dennis O’Shea, and Ruth Curley, an 18-year-old fresh off the boat from Ireland who was shot in the abdomen and nearly died from her injuries.

Celtic Park belonged to the Irish-American Athletic Club, the storied institution whose members took home 10 golds at the 1908 Olympic Games in London. From its opening day in 1901, it had also been a community focal point for emigrants, “the great Irish playground” where admission fees for sporting events once went to Clan na Gael to help fund the Easter Rising.

When the Volstead Act prohibited the sale of alcohol in America from January 17th, 1920, the unofficial village green of the diaspora also became synonymous with rum runners hawking all manner of rotgut, and drinkers imbibing in plain sight.

“Last Sunday, we had almost a murder in Celtic Park,” said Judge Burt Jay Humphrey, categorising the incident as one more example of why alcohol needed to stay illegal.

“Ever since the law has been in force, men have been peddling this poison at public parks and I have been doing what I can to stop it. The Celtic Park affair is an example of the effect of this stuff upon people. It inflames their minds and causes them to lose control of their senses. If people haven’t sense enough to care for themselves, it is up to those of us who have a little more sense to protect the weaker ones.”

PJ Conway, Limerick-born president of the Irish-American Athletic Club and former horseshoe champion, railed against newspapers depicting his beloved venue as a haven for “drunkards and rowdies”.

He pointed out the facility had been rented that day to the International Steam and Operating Engineers’ Union for its annual summer outing, and two of his own members on the gate frisked anybody they suspected might be carrying liquor. He neglected to mention the police operation was the culmination of months during which Celtic Park had earned a reputation around town as an open-air speakeasy.

The fall out from the riot did lasting damage. Within a decade, the gates were locked, the old wooden grandstand razed and the land sold to a property developer. The Celtic Park apartments that he built in that corner of Sunnyside stand there still, a monument to where the Irish once sported and played. And, slyly, drank.