‘How close to the sea can I get, that’s always been my measure for success’ 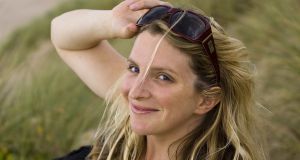 Easkey Britton: “For me, it’s been this constant force and a really positive one in my life, to have that connection with the outdoors and something like the sea.”

“How close to the sea can I get, that’s always been my measure for success. Whatever I’m doing, whatever job I take in life has always been designed around the sea. Times like this, I really appreciate that”.

Known as a trailblazer and one of the few original Irish surfers on an international stage, Britton has seen it all when it comes to surfing.

“For me, with surfing, I’ve been at it since before I can remember. Probably standing on a surfboard since I was about four years of age, at least. For me, it’s been this constant force and a really positive one in my life, to have that connection with the outdoors and something like the sea as well. It’s such an interesting environment to be quite literally immersed in. From when I was 12 years of age, I was on the Irish surf team.”

Water has always been a massive part of Easkey’s life. Sure, the surf and catching waves is a huge part, but the power the water has in how it heals, unites and enables people is why she keeps coming back.

“Surfing for me has always been, I think, a bit more than that. I’ve been interested in how we’re travelling with it so much from a young age. It’s been a really interesting medium to connect with other people across cultures. Then I think probably the earliest experience I have of recognising that water is a place that can be healing and therapeutic. I realised that when I was 10-years-old in Donegal. ”

The discovery was incredibly simple. Having met and seen some children coming over from Chernobyl as part of Adi Roche’s charity, Britton saw first-hand the impact seeing the sea had on these children, let alone their feelings after being in the water.

“To meet other kids my age from somewhere else who were seeing the sea for the first time kind of blew my mind just to see the effect it had on them, and the experience of getting into the sea and surf for the first time and the transformation in such a short period of time in terms of mood and energy, and initially how really withdrawn or cautious fearful even they might have been.

“Then, like after an hour of playing around in the surf, coming out, just this total change in energy and having big smiles slapped on their faces, and it didn’t really matter if you couldn’t fully understand each other. Just all those things, all those kind of barriers fell away.

“Then, many years later, I came back to surfing in a way as this form of therapy, or what’s been called in the research side of things ‘blue care’, using those water environments for its restorative qualities.”

The interest led Britton to start researching and publishing guidelines on how best to use our outdoor space, incredibly apt, given how the world is returning to outdoor or physical activities in order to keep sane.

This research, entitled “Nature Connection Toolkit”, is a culmination of five years of work with the NEAR-Health project at NUIG, funded by EPA and the HSE, on the benefits of nature for health and wellbeing, especially the power of water to heal and restore. In Britton’s own words, she wanted to turn anecdotal evidence into well-founded science-based fact.

“It’s interesting to see basically, across the board, any activity people have where they are outdoors engaging with nature, it has a significant effect, and so reduces stress and anxiety and things like that. There were particular things about water and this is what I’m interested in too in the research I do. It’s not just the sea, but it can be rivers and lakes and as well. But there is also something in particular about the sea.”

Surf therapy, particularly in America, has been on the rise. The idea behind this is to facilitate a new type of recovery from those suffering from PTSD who have come home from warzones. On the water, there isn’t as much pressure on the joints. As well as the physical benefits, Easkey is quick to point out there are psychological and emotional benefits.

“Obviously, being immersed in water, in particular, saltwater, there’s that connection with your body, the physiological rehab from those kinds of injuries. Then there’s also the quality of the sea, that you’re immersed in this environment, it’s uncontrollable, it’s fluid, it’s constantly changing, it has an energy of its own. There are a few things that happen.

“As humans, we’ve left our comfort zone on land, and we’re intentionally being vulnerable by going in the water, and so it opens us up, I think, to have more profound experiences. It’s been my hunch, but it’s also the evidence is now backing, that it allows us to work with more complex emotions like fear, to actually move through them rather than avoid them.”

On top of that, there is also another beneficial element; the socialisation which has, to some effect, been taken away from us since March. Although a lot of water sports are really defined as individual sports, what’s rarely taken into account is those individuals competing against one another form a close bond. Easkey has a few theories as to why this is the case.

“Being in the sea and just from observing how people interact socially, there’s something else, you might say with the swimming, people are coming from different backgrounds in their work clothes, or back from the school run, and you shed all of that quite literally on land.

“Then you slip into the water, and you’re all the same in your black wet-suit or your swimsuits, and away you go. It doesn’t really matter who you are or whatever baggage it was that you’re carrying on land, you can just be totally free to be who you are and however you feel in the moment.”

While there are many challenges outlined in the report such as access to nature, pollution and an ever changeable weather front, one thing is for sure, nature and its many healing benefits are being discovered throughout our current lockdown.

While many people are only availing of it now, for people like Easkey Britton, the aim is simple: get people into the outdoors to experience nature on a holistic approach. Use nature for those who need particular health services in a way that could boost their overall health, and more importantly, create an environment that is as accessible as it could possibly be while also preserving the beauty, sights and sounds of nature.

As Easkey puts it herself: “Nature isn’t just a frill. When we think about our health, we’re thinking about it in a holistic way so that it’s the biological, it’s the social, and it’s the environmental and how they all stack up for each individual and then looking at that at a community level.”