The sky’s the limit and then some for Edel Thornton 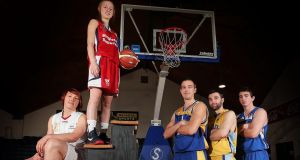 Edel Thornton isn’t your average Irish athlete. In fact, she isn’t your average basketball player either. Picking up basketball wasn’t exactly the first thing on her mind when she was younger, despite her older brothers Frank and Jamie being involved in underage sports in Cork’s north side. It was one of her friend’s family who eventually pushed her into the game that’s taken her across the globe at the ripe old age of 23.

“Every time, we used to go to each other’s houses every Wednesday. Her family were constantly asking me ‘Do you want to go to Parochial Hall?’ and I was like ‘Not a hope,’” explains Thornton during our evening Zoom call.

“Even though every time I went with my brother (Jamie) I was like, ‘I’d love to play that,’ and then I just I never did. Jamie’s not playing anymore but I absolutely loved it, and it was just something that kept me going, and I just am so happy I went in the door that day. I just knew that I always wanted to do it, but I never did it. I needed that push to go for it”.

From that day forward, Thornton was sold and fell in love with the game. Thankfully, everything went incredibly well at underage level for her, something she credits to her coaches, Kieran O’Leary - Brunell’s coach - and Dommie Mullins, St Vincent’s coaching guru. From the off, Thornton is keen to relay just how influential they are.

“I think, especially for young girls in sport in general, I think a coach can make or break your career. Growing up, I was so lucky that my club Brunell, close to where I grew up, was so family-oriented. I just think in general, Irish sport is that way. I learned that through and through when I went to America. Especially Brunell, we were so close. All of my friends were on my team. One of my best friends, her dad was our coach. It was just a steady rock for us.”

Family is something that’s reiterated any time you go up to St Vincent’s or Parochial Hall. It’s especially evident in the teams that are dotted throughout Cork. Thornton counts herself incredibly fortunate that basketball, through her friend’s pushiness, found her during her formative years.

“You always saw the same faces at training, be it the coach or your team. It was always, everyone was around each other like you went to support the other younger teams, the older teams. It was just lovely, and it’s something that you don’t get a lot of places, and I valued that so much because I think at that age, it was so impactful in the rest of my life. That basketball was the way, it allowed me to grow up into the person that I am, and I wasn’t on the streets like the people in my class would have been hanging around the court, outside in the cold while we were always in a hall. It was just something that really was so instrumental in the person I became as well as the player.”

One place that made her realise that this wasn’t necessarily the case across the board was America, in particular her college team, Quinnipiac University in Hamden, Connecticut. Not that it was a bad experience, but it was more a wake-up call to the realities of basketball at another level.

“Honestly, I did it all. You’d think you’re ready for the fitness level, the intensity of division one, as far as basketball. Well, I knew I was going to struggle, but I didn’t think it would be that hard. It was just so mentally and physically draining the first two months, maybe three. I’m adjusting to a new lifestyle, college, in general, I’d never been to college before.

“No family around me, a time difference when I did want to talk to family, and the basketball was really hard. I’m physically tired and mentally drained. It was difficult because I didn’t think I was coming home for Christmas either. I was just, ‘Oh my god, I have to be here until May,’ and I think it really dampened my experience at the beginning and I regret it now.”

After gaining a wealth of experience after the opportunity of a lifetime, it was back to Ireland the chance to continue her career and studies as a behavioural psychologist, specialising in researching communication systems for children with autism and their special needs assistant. “A lot of the kids that I work with are non-verbal, and they’re on the autism spectrum. I would essentially be teaching the SNA how to train the child. I can give them a communication system, essentially.”

As of now, Thornton is sitting at her computer, waiting for some white smoke from the various decision makers about when she can play basketball again. “I think that’s a good thing for me at the moment because it’s keeping my mind ticking over especially with the season being cancelled and stuff. It’s just strange, and I just feel like I’m not good in this unknown. I’m like, ‘Am I going to go back to work after the mid-term? Are we actually going to open?’ I love to plan ahead. It’s a bit all over the place, but I’m going to take it out and go back to work, and I’m going to plan for that, and I’m going to make sure that I get out on the road, running again. Try to keep some fitness going”.

The frustration is evident. With no Super League to take her through the Christmas period, time is ticking away, valuable time that’s needed to prepare for the 2021 FIBA Women’s European Championship for Small Countries, which take place in Cyprus from June 15th-21st. For now, Team Ireland have managed to get their first big-time sponsor for the women’s team, Gotham Drywall. Basketball Ireland has continually put the women’s team forward for sponsorship to take the pressure off the girls. It was certainly a long time coming.

“I was speaking to one of my buddies that was in college with me, she’s from Latvia. She thought it was hilarious that I had to pay to play for Ireland. It wasn’t you’re paid to play, once you made the team, you have to pay them. You were picked to be one of the elite people in your country at your sport, but you have to pay to get the jersey on your back. At younger ages, you don’t really realise that it’s mom and dad.

“You do a fundraiser here and there or mom and dad help, but now at a senior level, we got to train, and we all got to work. I think it’s very rare for an Irish person to be a pro on the Irish League, like a pro here. The fact that Gotham Drywall did come together with this massive sponsorship is brilliant for us because obviously, it’ll give us the gear. It’ll just take some pressure off people because it’s hard enough to play any European Championships when you have to worry about the financial aspect of it as well”.

Thornton is now one of the older heads on the team, despite only being 23. One thing seeps into our conversation. When she was 16, and I was 17, a very young Edel Thornton attended one of my school talks in St Vincent’s Secondary School. That day, she won the school’s best athlete award. The sky was the limit then, but it’s safe to say she absolutely shattered the sky and set the new standard.