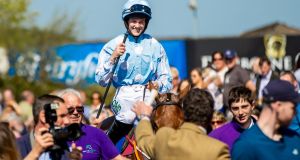 “As the saying goes, ‘we’ve come a long way, baby – but we still have a long way to go,’” said Martina Navratilova when she joined a stellar list of online speakers on Wednesday to mark the conclusion of the two-year 20x20 campaign, which aimed to promote women’s sport, chiefly by targeting an increase in participation rates, match attendance figures and media coverage.

Sarah Colgan, founder of the 20x20 movement, opened the “virtual wrap event” by revealing the findings of research carried out to gauge the impact of the campaign. While much of it was positive, not least the 80 per cent of respondents who said they were more aware of women’s sport since its launch, there was disappointment in the figures relating to media coverage.

Despite the audience for women’s sport on television growing from 7 to 18 per cent, there had, said Colgan, been a 40 per cent decrease in coverage, including subscription TV, the exceptions being RTÉ and TG4, who both increased theirs.

On the upside, 61 per cent of those polled said they are now more likely to support women’s sport, while 75 per cent of men said they have a more positive attitude towards it. Meanwhile, 42 per cent of women say they are participating in more sport and physical activity than in 2018, with match attendances increasing by 17 per cent.

Women pushing women’s sport is an easy win, it’s up to men now, there’s a big onus on us

The general theme of the day’s discussion was, then, “a lot done, more to do”.

Navratilova, speaking from her home in Miami, talked about her sporting history and the many equality battles she faced along the way, MC Jacqui Hurley reminding her that while the US Open introduced equal prize money in 1973, it took Wimbledon until 2007. “There were always excuses,” said Navratilova, “one time it was because they needed the money for petunias. I can’t remember who said it – but needless to say it was a man.”

“This is not the end, this is just a starting point,” said O’Sullivan. “It’s a positive that we’ve made some progress, we have to build on it now.” That thought was echoed by all the contributors, O’Driscoll insisting that more men had to do their bit in promoting women’s sport.

“Women pushing women’s sport is an easy win, it’s up to men now, there’s a big onus on us,” he said, saluting Justin Rose and Andy Murray for their public support of women’s sport, but insisting that more high-profile sportsmen needed to do the same. Mind you, he’s had some interesting social media pushback for doing just that. “One fella said, ‘the Feminazis have gotten hold of you,’” he said.

“So, ‘Blackmore wins Gold Cup’,” said Hurley, suggesting a headline for next March.

“If I win the Gold Cup, they can write whatever they like,” she laughed.