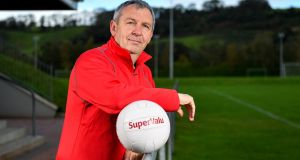 Peter Keane’s Kerry team resume their league campaign next weekend with a trip to Inniskeen to take on Monaghan. Photograph: Sportsfile

Kerry football manager Peter Keane has acknowledged that this year’s All-Ireland may well come with an asterisk. He was speaking at the launch of SuperValu’s ‘Support Where You’re From’ promotion on Friday.

He was asked about the prospect of teams being excluded because of coronavirus and whether it would demean this year’s title.

“’Demean’ is a very strong word but it probably would have an asterisk beside it alright. I don’t know. Look, it’s very possible that a team could down on a Thursday or a Friday. I know there has been some talk about fast testing but I have seen no evidence of fast testing. They’re talking about it coming.”

Keane, who owns a Super Valu shop in Killorglin, also spoke about the anxiety experienced when getting calls from players in case they are reporting infection.

“You get a phone-call during the day and it could be any player ringing me and the first thought is, ‘Oh sh*t, have we a problem here?’ We’re on tenterhooks, we’re hanging here by a thread I think anyway.

“I’m not talking about Kerry, I’m talking about every team hanging by a thread. There are obviously stories out there about teams who have problems. Problems is the wrong word because I think it’s just a fact of life. It’s not a bad reflection on any team; it’s society; we’re all mixing.

“We can’t say we’re in a bubble because I’m working in SuperValu, all the players are working or in college. They have families. Their parents are working. We’re all trying to mind ourselves and our communities.

“You take a lot of older people who were suffering from cocooning early on and the mental health associated with that. But equally you had a lot of young people from 14, 15 upwards and they need to socialise too and minding all those people is very difficult.”

Kerry resume their league campaign next weekend with a trip to Inniskeen to take on Monaghan. Their manager expressed surprise that the GAA hadn’t opted to fix half-way venues for matches with long distances involved for one of the teams.

“I thought there was an awful lot of logic in neutralising the venues. I thought they might do that yesterday (when the upcoming AFL programme was reviewed).

“I’m speaking of both sides as we have to travel to Monaghan and Donegal have to travel to Tralee the following weekend and that’s a hell of a long journey as well. You have a lot of hotels closing as well. There’s definitely a lot of wait and see.”

He also gave some insight into the logistical demands on managers, organising away trips, especially in the league with its greater distances.

“The game is at two o’clock in Monaghan. We’re looking at a situation where it’s probably too far to travel on the day albeit it’s something I would like to do with the environment that we’re in.

Keane was also asked about whether the pandemic had brought five-in-a-row champions Dublin back into the pack given the emergency reintroduction of purely knockout football. He - inevitably - disagreed, pointing out that more experienced teams would cope better with the unusual demands of the imminent season.

- SuperValu is calling on GAA fans across the country to ‘Support Where You’re From’ by showing their incredible county passion and pride from the safety of their homes and communities. Go to www.facebook.com/SuperValuIreland for more information.