All-Ireland championships roaring into life in May 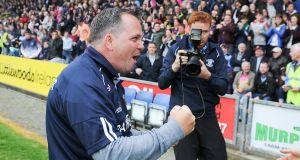 The All-Ireland champions in football and hurling. Suddenly must-win games for Tipperary and Clare. Semi-finals in two provinces already and the first time the Galway hurlers get to play a Leinster championship match at home.

That’s 12 matches - eight in football, four in hurling - and it’s still only May: the new super condensed GAA championship format waits for nobody.

All-Ireland hurling champions Galway already have one victory under their belt, beating Offaly last Saturday week, and resume their Leinster round-robin campaign this Sunday when welcoming Kilkenny to Pearse Stadium.

It will be Galway’s first home game since joining the Leinster championship in 2009 (although they did host Clare in 2011 qualifiers, winning 4-25 to 0-20 in Pearse Stadium).

It’s also the 11th meeting between the sides in that same period, Galway’s only win from the previous 10 games being the 2012 Leinster final. The 2012 All-Ireland final and the 2014 Leinster semi-final were drawn, with Kilkenny winning both replays.

Last year’s beaten All-Ireland finalists Waterford get to play their first game in Munster, making the trip to Clare, who fell narrowly to Cork on Sunday. Tipperary, who also lost narrowly to Limerick, will host Cork, and another defeat would put them under great pressure to make the Munster final.

Wexford, who opened their Leinster campaign by beating Dublin, are on the road to Offaly on Saturday evening (7.0pm) - one of three games to clash with the Champions League final between Liverpool at Real Madrid, which has a 7.45 start in Kiev. The Ulster SFC quarter-final between Down and Antrim throws-in at 7.0pm, as does the Munster SFC semi-final between Tipperary and Cork.

While he’s no complaints about the timing of the game, Wexford hurling manager Davy Fitzgerald has questioned the sense of his team being asked to play four weekends in succession (the only four teams in Leinster have their four games staggered and with that get one weekend off).

“I just think one more week in between,” said Fitzgerald. “We are one of two teams (along with Waterford) that have to play four weeks in a row, that is very hard guys, trust me. I can’t afford to look at week three or four yet until I get over number two, and it will be tough. And we will have to look at training the lads differently.

“The only thing in my head is Offaly next week, I have to pay them the utmost respect, I know they are on the way back. I can’t think about who will play who. I just have to think about Wexford and make sure they prepare properly for a game, it is my job to do that, get ready for that. All I know is that it is going to be a battle up in Tullamore and I have to get my lads ready for that. Week after week is tough.

“I have an awful lot of respect for what Kevin Martin (the Offaly manager) has done, he has done an incredible job. He has really bridged the gap, and I always said that they might catch someone in the championship. And they have to win against us, you would normally tell us that Wexford find it hard to win up there, no matter what the story is, we always find it tough. So that is coming. We have to get ready for it.”

In football, Dublin begin their quest for a fourth successive All-Ireland with a short road trip to Portlaoise to play Wicklow: Wexford (1915-18), Kerry (1929-32 and 1978-81) are the only counties to have won the four-in-a-row.

Wicklow have never won the Leinster football championship, nor indeed beaten Dublin. It’s 12-0 to Dublin in the championship and 18-0 in the league. There were also 30 places between Dublin and Wicklow in this year’s league, Dublin finishing second in the Division 1 table (they beat Galway in the final), while Wicklow finished bottom of Division 4. Dublin haven’t lost a Leinster quarter-final since going down to Westmeath in 2004.

The championship is still waiting, however, for its first big shock of the summer.