Peter Keane: ‘Is the gap bridgeable? Of course’

Kerry’s manager is understandably terse the morning after defeat, but he soon opens up 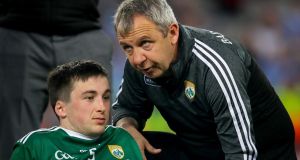 The hotel foyer of the Clayton Hotel is consumed with regret.

It’s Sunday morning and the Irish cricketers, their Dutch counterparts and the Galway ladies football squad are waking up to go about fulfilling destinies and ambitions. But their buzzing optimism is submerged within a palpable regret – Kerry’s.

So when Peter Keane eventually sits down with a small group of hacks, he’s even less loquacious than usual. As expected.

How is he feeling the morning after his first championship defeat?

“I’m disappointed we lost an All-Ireland,” he says.

Are the team able to take some positives from their performance against arguably the greatest side in history?

“It isn’t a positive or a negative this morning. We’re after losing an All-Ireland. You’re asking me questions about it and I’m answering them as best I can.”

The future is undoubtedly bright for Kerry’s youngsters, with many people predicting this side will eventually overtake Dublin before claiming a monopoly of their own on that prestigious chalice.

This can foster belief. It can also bring pressure.

“A bird in the hand is worth two in the bush.”

But he gradually opens up, paying tribute to the history-makers and pointing to the achievements of his own team, whose route to the final, he believes, was one of the toughest ever taken.

“The team is young but at the same time, by Christ, we had a hard job to get to where we got to this year. We’ll just have to go and start again.

“Not alone have Dublin five titles, but they’ve seven out of nine won. It’s a phenomenal achievement. And you’d have to congratulate them on that.

“Is the gap bridgeable? Of course it is. Otherwise we’d all pack up and there would be no one playing. You have to have somebody with a bit of belief that can do something.”

The opening seconds of the second half ultimately proved Kerry’s downfall, with Eoin Murchan taking only 10 seconds to raise a the only green flag of the game. There may have been a question mark over the amount of steps taken by the Na Fianna defender, but it was a subject Keane was keen to avoid.

Instead he turns to look at his own side’s performance, noting the poor return of scores over the course of the second half.

“At the end of the day you have to score to win.

“What did we have? Five from fifteen shots in the second half or something like that. You could say there was pressure on those kicks, too, but at the same time you’ve got to score to win.

“You’re not going to win an All-Ireland scoring five points in the second half.

“But look, it’s an All-Ireland final and that’s what players want to be playing in. All these fellas got an opportunity to play inside in a full house on a beautiful day in Croke Park again yesterday.”

A more euphoric foyer surely beckons for Kerry in time. Until then there’s a winter of hurt to fuel up on the anguish.