Dublin take five and their deserved place in GAA history

Statistics won’t convey the ebb-and-flow, crises befallen and resolved that made five 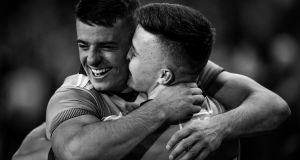 The tumult on the pitch eventually subsided and by the time Dave Brubeck sounded a mellow finale, the fact sank in that this was history. It never feels like it at the time but in years ahead 14th September 2019 will appear as the date that something never before achieved in the GAA’s 135 years happened.

It was a fitting conclusion. Kerry, fired by their own traditions and bright hopes for their current generation, went toe-to-toe with the champions.

It would be implausible to overlook their special motivation to prevent Dublin achieving what their legendary forebears couldn’t in the booby-trapped closing minutes of the 1982 final but Kerry football is a continuum.

They take the lessons of Saturday evening and move on with a terrific team, who will prove as much in the years ahead and that added to the lustre of their opponents’ achievement.

The first half was a blaze of well-provisioned artillery: attack for attack, some of the game’s most conspicuous attacking talents locked and loaded. Paul Geaney, David Clifford, for Kerry, and Con O’Callaghan, Paul Mannion and an outstanding Ciarán Kilkenny cracked away for the 35 minutes.

Kerry had three wides; Dublin had none (but three dropped short) and it wasn’t until the 44th minute that they registered their first, by Mannion. Ultimately it came down to accuracy. Dublin had it throughout whereas Kerry tired.

The key score honoured Dublin’s history as well as being the corner stone of its new monument. Jack McCaffrey, star of the drawn match, was predictably more subdued but then he pulled a hamstring and had to leave at half-time. Eoin Murchan was brought in before throw-in to allow James McCarthy take Michael Macauley’s place at centrefield.

By the statuesque proportions of the modern game, he looks like a child caught in a stampede but he runs like the wind. David Moran got a fist to the throw-in and the ball ran as far as Murchan, who took off at pace, searing through a Kerry defence that appeared unaware of the danger of what was hurtling through on their goal.

The score reminded you of Kevin Moran’s defiant solo at Kerry in the 1976 final – except this time it was a goal.

The first draft of history has a context.

To re-peddle a story: a more experienced colleague, asked was it not boring to cover football in the pomp of Mick O’Dwyer’s Kerry team, replied that no, it hadn’t been really because no-one could be fully certain what was going to happen year in and year out.

Yet despite serial success, no multi-title winners’ grip on the All-Ireland has been so hard won. Year after year, final victories have been eked out in matches offering agonies of frustration for the vanquished.

When Mick O’Dwyer’s Kerry completed the four-in-a-row previous to Dublin’s, their average winning margin on finals was more than nine points; Dublin’s was just a touch above two.

Saturday pushed that closer to three and it was unquestionably Dublin’s finest and most sustained display in all nine of this decade’s All-Ireland finals, including two replays.

Defeats are more rigorously pored over than victories but there was a point before the four-in-a-row even started when the whole sequence felt imperilled. Mayo had staggered back from the abyss at the end of the drawn 2015 All-Ireland semi-final and should have won the match, having recouped a seven-point deficit.

In the replay after a week of controversy at the end of which Diarmuid Connolly was miraculously spared the consequences of a red card by the DRA – a deliverance that didn’t help his performance – Dublin were facing oblivion as the hour mark ticked into view.

If anyone needed to know why there was such fuss about Bernard Brogan in last couple of weeks, it was a day like this, four years ago.

In little more than 60 seconds he managed to score one goal, reactively positioning himself like a tennis player being lobbed to smash home Brian Fenton’s wayward kick at goal, and make another by pulsing along the end-line to tee up Philly McMahon. Two goals. Game effectively over.

Gavin brought a level of relentless excellence to preparing his teams. He was tactically curious and also keen to replenish the playing resources rather than let his teams grow old

Like all sporting achievements this had its origins in adversity and the epiphany of a bitter defeat. After Donegal spectacularly exposed the fault-lines in Dublin’s buccaneering style of 2013-14 in what remarkably will be by next summer the county’s only defeat in eight years, Jim Gavin knew that a new approach would be needed.

A match in the spring of 2015, which marked Brian Fenton’s last appearance as a replacement before becoming first-choice came coincidentally in a league fixture against Derry that laid the foundations for this weekend.

The sense of unease and despair triggered by the match made it appear like football’s Manhattan Project. Dublin won by 0-8 to 0-4, the winning points coming in the last 10 minutes or so by which stage the teams were still locked at 0-4 each.

Jim Gavin was deconstructing the blanket defence, fibre by fibre. Gone were the panicky running blindly at a packed defence and taking pot shots from improbable distance, which had characterised the breakdown of the previous summer.

Now, if a team wanted to funnel back, Dublin would keep possession and probe patiently.

The normally elliptical Gavin was completely explicit on the new approach. “You can either have a full court press, which we have used in the past to great effect, particularly last year against Derry. We went for something different tonight and I think our guys stuck at it and worked really hard.”

Arguably its apotheosis came when Tyrone were dismantled in the 2017 All-Ireland semi-final when Dublin monopolised the ball and pounced when an opening appeared.

Newcomer Con O’Callaghan had scored a goal in the second minute, rejecting a settling point in favour of going for the jugular – a mindset so at odds with the cagey projections for the match that in an interview a few months later, a disbelieving Mickey Harte criticised the Dublin forward for not tracking back when his marker had counter-attacked before getting turned over.

The historic year started a little uncertainly. For a team that had always set such store by the league, failure to reach the final to defend their title and a lowest finish in the table for five years was excused by the need for relentless focus on the championship in this year of years.

For some this had the appearance of concessions being made to the pursuit of history – concessions that hadn’t previously been made.

It will always be a central feature of Jim Gavin’s place in GAA history that his teams competed all the time: no flirtations with relegation; no making of experimental albums so that they’d be tighter during the summer; just a playing of every competitive match on its merits.

That was what led to the extraordinary run of 36 unbeaten matches in league and championship from March 2015 up until the league final of two years later. As with this weekend, Kerry were central players, bookending the great run, which relegated to second place a sequence of 34 established by their great predecessors of the late 1920s and early ‘30s.

It was fitting in the end that so many of the players from the first great achievement in 2011, under Pat Gilroy, were on the pitch: Cluxton, Macauley, O’Sullivan, McManamon, McCarthy, McMahon and Fitzsimons. It’s not clear how many will still be in harness next year but it’s certain that they all won’t.

There’s plenty of speculation that he too, and his management, will call it a day but what a legacy. It has been pointed out that this doesn’t make Dublin the best team in history but it makes them the most successful. Teams can only play in their own era.

Gavin brought a level of relentless excellence to preparing his teams. He was tactically curious and also keen to replenish the playing resources rather than let his teams grow old. There’s no rocket science in that but the players he put his chips on nearly all paid out: in this run on history, Fenton continues not to have lost a championship match, as do others like John Small, Brian Howard, Con O’Callaghan, Niall Scully, Murchan.

“Jim Gavin is a very good judge of racehorses,” is one long-time and informed observer’s view. “He has that Aidan O’Brien capacity to see in a guy particular qualities and they very rarely disappoint.”

This year has felt different, more of an exercise in getting over the line. Would he three years ago have given Diarmuid Connolly a fast track back into the panel while some of his ever-present contemporaries struggled to get a place on the bench?

This year has also been notable for the lack of a new starter in the first team. It’s also draining, driving these sort of standards in an amateur game. No-one could be surprised were he to decide his work was done.

Gathering dust in record books All-Ireland finals might look factual and beyond conjecture but statistics won’t convey the ebb-and-flow, crises befallen and resolved that inevitably make up matches. It makes the whole idea of five-in-a-row all the more mythical.