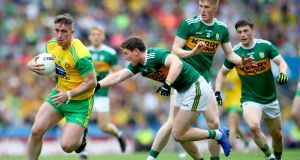 Paddy McBrearty: could make his first appearance of the spring in Donegal’s visit to Dublin. Photograph: James Crombie/Inpho

You can throw a napkin over the top seven teams in Division One, which slightly obscures Donegal’s terrific start. Best points difference, joint best defence, joint most goals – only some late carelessness against Mayo and Galway has cost them top spot. All without Patrick McBrearty who could make his first appearance of the spring here. That said, they have just one league win against Dublin since the turn of the century and Dessie Farrell’s side could be in knuckling-down mood after their last outing. Verdict: Dublin

Kerry supporters can’t bemoan a lack of drama anyway. So far they’ve seen a draw, a one-point win and a one-point defeat, making them the only team across the four divisions with a points difference of zero. They will look to improve upon that here but their defence still needs tightening – only Leitrim have conceded more. Meath are gradually acclimatising to this level but their fate looks increasingly certain. Lose here and they could be relegated as early as next weekend. Verdict: Kerry

Early days but Galway seem to be finding a bit of joy again. Shane Walsh in full cry, corner-backs belting forward to score goals, Damien Comer getting his sea legs under him after so long out. A visit from Tyrone is always a decent test of a team’s faith in its own optimism though. Mickey Harte’s side may have been unconvincing so far but they still have two wins from three games to show for it. If they’re in the mood, they’re just cussed enough to halt the Galway gallop. Verdict: Tyrone

Looks like a pivotal game for both sides. Presuming it isn’t a draw – an obviously rash presumption, but let’s go with it – the outcome will dictate what the rest of either team’s league looks like. Monaghan have had a better run with injuries than most and they get Colin Walshe and Jack McCarron back here. James Horan includes Darren Coen for the first time this year as one of five changes from the Meath game. The home side look to be more advanced just now. Verdict: Monaghan

Forget Aughrim – Brewster Park needs to get its due as market leader in tough places to get a result. It’s almost three years since Fermanagh have lost a league game in Enniskillen, a run that includes wins over Roscommon, Kildare, Clare (twice), Wexford, Offaly and Derry as well as draws with Cork and Armagh. No reason they can’t keep it going here. Verdict: Fermanagh

The formlines in Division Two are so knotted they’d anchor a ferry. Laois schooled Armagh, who had hammered Cavan, who last week battered Laois. Clare beat Kildare but got minced by Roscommon, who had earlier drawn with Laois. Mike Quirke’s team didn’t deal with the weather last weekend but have been trending generally well and can get their groove back here. Verdict: Laois

Two home games, two home wins so far for Westmeath. This is the sternest test they’ve faced, however, against an Armagh side that was impressively clinical in brutal weather last time out against Kildare. The return of Ray Connellan has been a boost to the Westmeath forward line and with Luke Loughlin alongside, they have a better chance than the 5/2 odds suggest. Verdict: Westmeath

It’s been, to put it kindly, a spluttering start for both these sides, neither of whom would have envisaged themselves so badly needing a result so early in the campaign. If Kildare don’t win here, they’re prime relegation candidates. If Roscommon don’t win, they can more or less kiss goodbye to promotion. The visitors look to have found form so we’ll go with them. Verdict: Roscommon

Not quite a de facto promotion play-off but not far from it and therefore crucial to what competition both teams will play in come summer. Longford are unbeaten but have had the handier schedule. Down can make their promotion push from here. Verdict: Down

The fact the Tipperary are the lowest scorers in the country highlights just how badly Michael Quinlivan has been missed. They face the highest scorers here in Cork, whose scalded-cat haste to get out of the division should see them have plenty to spare. Verdict: Cork

Louth look doomed, having failed to take even a point so far and with games against Cork and Down still to come. Rory Gallagher has brought Derry along in his usual incremental way and they will surely keep themselves in the hunt with a home win. Verdict: Derry

High stakes in this one. An Offaly win would buy them breathing space for the rest of the spring and bounce them clear of the relegation swamp. Leitrim need the points to keep their campaign alive. Hard to see them having the scoring power. Verdict: Offaly

Sligo have arrested the slide impressively in this campaign and don’t look likely to stumble against winless Waterford. Verdict: Sligo.

Bigger tests ahead for Wexford, who have reacted well to their opening day defeat to Antrim and should keep kicking on for promotion.

Top of the league is a distinctly unLimerick place to be but if they pick up more momentum here, their fate will be in their own hands. Verdict: Limerick

Antrim’s campaign will be decided in the next seven days with home games against Carlow and Limerick. They seem to be on the up-and-up and should prevail here. Verdict: Antrim

1 Jim McGuinness: There is a way to save championship and make it competitive
2 Once in a blue moon: Cavan’s overnight success 15 years in the making
3 Autumn Nations Cup - Ireland v Georgia: TV details, kick-off time, team news and more
4 Ireland’s clash against Georgia will be an important audition
5 Sordid murder of hurling brothers still resonates in south Galway
Real news has value SUBSCRIBE