Second half goals get Cavan over the line against Fermanagh 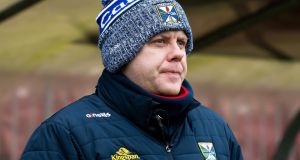 Two goals in the space of five minutes effectively clinched this derby match for Cavan against Fermanagh in Brewster Park on Saturday evening.

Both goals came from high lobbed balls into a shaky looking Erne full back-line early in the second half. The first, was a high ball into the square where Cavan full back Pauric Faulkner was unmarked and flicked the ball to the net.

The second goal came five minutes later from a carbon copy long ball - this time midfielder Thomas Galligan lashed his shot to the net and that score put Cavan into a 2-9 to 1-7 lead.

And even though the wasteful Ernesiders, who hit 12 wides, rallied they were not able to claw matters back.

An early goal from Ultan Kelm had kept Fermanagh in front during the first half, one in which marksmen Gearoid McKiernan and Conall Jones traded impressive scores and Cavan lost Evan Doughty to a black card.

The Ernesiders had another chance at raising an early green flag after the change of ends - but missed an open goal.

In the 42nd minute wing forward Ciaran Corrigan intercepted a poor kick out by Cavan goalkeeper Raymond Galligan, but his attempt at goal missed the empty net, albeit from a slight angle.

The home side then lost Stephen McGullion to a black card - before Cavan pounced for those crucial goals that sealed this affair.

Pat Critchley: ‘You teach or coach the person first and the subject or the game second’

1 Cheltenham faces criticism after racegoers suffer Covid-19 symptoms
2 Health official says decision to hold Liverpool-Atlético game was wrong
3 Ian O’Riordan: Learning to run for the first time all over again
4 Cycling Ireland thrilled with take-up for Zwift League series
5 Sport will be last duck in the row in return to normality after coronavirus
Real news has value SUBSCRIBE

Sporting Poetry: Seeing far beyond the scoreboard 06:00
Pat Critchley: ‘You teach or coach the person first and the subject or the game second’ 06:00
Premier League 2019/20: End of season (for now) report card 06:00
Ian O’Riordan: Learning to run for the first time all over again 19:24
Davy Russell ponders what might have been for Tiger Roll 18:07
Crossword Get access to over 6,000 interactive crosswords