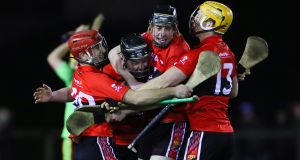 The tournament favourites trailed for most of the game and were five points down with 13 minutes to go.

But in what will go down as one of the great final fightbacks, Tom Kingston’s side reeled off seven points without reply to win it.

Conway was the key man in this period with five of those seven points and the Lixnaw man finished with 0-9 in total.

Cork stars Darragh Fitzgibbon and Shane Kingston also pointed during that late blitzkrieg as UCC made it title number 40.

It was particularly impressive as they were reduced to 14 players in the 50th minute following Niall O’Leary’s straight red card dismissal.

The Cork man was dismissed following an incident that left IT Carlow forward Chris Nolan on the deck.

It was tough on DJ Carey’s IT Carlow who were only competing in their second ever final after losing the 2017 decider.

They got a great start with goals inside the opening eight minutes from Seamus Casey and Kilkenny’s Liam Blanchfield.

Casey added a point from a free to leave IT Carlow 2-2 to 0-2 ahead but they conceded five of the next six points.

That was significant from UCC’s perspective as they were playing into the teeth of a stiff wind.

IT Carlow led 2-5 at 0-7 at half-time and added points from Stephen Bergin and Nolan after the restart to lead by six.

They remained half a dozen clear in the final quarter and a man up but UCC, led by Conway, came strong late on to keep the title in Cork.

IT Carlow still had chances to rescue a result and goalkeeper Enda Rowland brought it back to a one-point game when his 64th minute goal attempt deflected over.