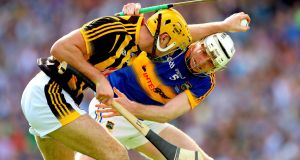 After all of the liberation theology of the past two years, Sunday’s All-Ireland hurling final brings us all back to orthodoxy with a firm smack of traditional teaching from that most august of texts, a Kilkenny-Tipp final.

It is strange that an unprecedented fifth occurrence of the same pairing in a decade of finals should be regarded as something of a surprise but that tells the tale of an unpredictable championship.

Neither team had a good league campaign and if Tipperary were almost being crowned champions after a few weeks of blistering hurling in May and June, never was the hoary old cliché that All-Irelands aren’t handed out at that time of the year, truer.

Kilkenny weren’t fancied because they were, to use that much mistrusted term, ‘rebuilding’ and more to the point, sagging under the weight of injuries.

Dublin nearly launched a successful raid on Nowlan Park, Galway did and in Innovate Wexford Park, had Lee Chin slotted both of his last two frees – instead of just the harder one – then we wouldn’t have seen Kilkenny for nearly two months by now.

These are the margins. Once champions Limerick, by that stage everyone’s favourites to retain the title, were beaten in a stunning Kilkenny coup, no-one could be quite sure of who was likely to take advantage.

Tipperary’s early flights were abruptly grounded in the Munster final when they disintegrated in the face of Limerick’s most complete power play of the summer.

So fractured and inconsistent has the summer been however that drawing a line between the Limericks of the provincial final and All-Ireland semi-final would be beyond even the most skilled draughtsman.

That’s not to impugn Kilkenny’s perfectly pitched ambush, which contributed to the crisis of confidence that afflicted the champions with their unforced wides and inability to impose themselves in their favourite theatre of war, the middle third.

It’s simply to dispense with any syllogistic reasoning that gives Kilkenny a clear edge.

Momentum is a factor. Kilkenny have been slowly picking it up since the disappointingly headless conclusion to the Leinster final. This is the third match running in which they have faced Munster opponents who are favourites to beat them.

For Tipp this hasn’t been like previous runs to the final. The semi-final required resistance and resilience but was helped by Wexford running out of steam. There weren’t the signs of 2009, ’10, ’14 and ’16 that this was a team on a perfectly-timed run.

Kilkenny’s defeat of Cork was well worked and featured the tactical improvisation that brought Conor Fogarty back to the half backs, which tightened up on the access to what had been a beleaguered full-back line in the first half.

He’s likely to return to centrefield with the selection of Cillian Buckley but if the latter has fully recovered, the reconfiguration will leave the team stronger.

In the semi-final, Kilkenny so successfully unplugged Limerick’s operating systems that even after a slightly fortuitous recovery, the champions could only get close but never wrest back control of the match.

Tipp won’t be so easily disorientated. They showed an unusually phlegmatic resolve in the early stages of their semi-final when Wexford were releasing the ferrets all over their defence. The well-advertised problem is that Kilkenny forwards are likely to prove prolific and eagle-eyed than Wexford defenders if they get such chances.

In truth, Kilkenny won’t play like Wexford but that doesn’t mean they won’t run at Tipp with whatever consequences that has in terms of scores or frees.

There is a view based on the beautiful games of May that Tipperary’s forwards may prove too hot to handle but the dazzling form of those productive days isn’t as clearly on display. Séamus Callanan is banging goals away but John McGrath has been struggling for form, leaving the semi-final both early and scoreless.

John O’Dwyer improved enough to play a significant role in Tipp’s recovery but has still to get back to his best.

Conversely, Kilkenny have been getting returns from their attack – four of whom have hit at least three points in either the quarter – or semi-final. Colin Fennelly is having the best season of his career, Adrian Mullen is showing top-class form for a rookie and Walter Walsh is making tangible if intermittent contributions.

TJ Reid was allowed direct the orchestra in the semi-final but Brendan Maher’s metamorphosis into a top marker is likely to make that a watershed contest. Pádraic Maher and the Tipp half backs won’t be looking to launch running attacks but with a foothold they will do worse and pick their shots into the forwards.

Noel McGrath presents the same menace at centrefield and will make the ball do the work but the change to Kilkenny’s selection stiffens the likely resistance in the sector.

For all of the discouraging attacking differentials, Tipp put up 1-28 in the semi-final despite being a man short for half an hour – getting for the first time this summer a decent dividend off the bench.

There is plenty of motivation both ways. Kilkenny were destroyed when the counties last met in the final but Tipperary haven’t beaten them since and the 2017 league final was an embarrassment.

But Tipp are well seasoned by now and getting the bounce of new management. They must have wondered what the point was after the Munster final but by taking Limerick off the road, Kilkenny have opened it up for both their opponents and themselves.

That road will have to fork on Sunday and Tipperary are just about favoured to be the ones striking for home.