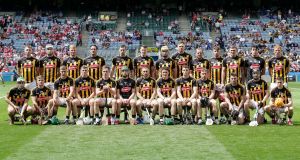 The Kilkenny squad ahead of their quarter-final win over Cork. Photograph: Laszlo Geczo/Inpho

Best in the business for a while now. Athletic, quick and quick-witted as well as a good shot stopper. Puck-outs and long-range frees immaculate. Had to come back from a serious injury this summer but performance levels as high as ever.

Under pressure for a lot of the season to date like the full-back line in general. Persistent fouling on Conor Whelan earned him a red card against Galway. Things have picked up since but he’s not the dominant force of old.

I’ve admired him since his days in UCD. Physically he’s growing into his frame and getting stronger. Has faced firestorms in Patrick Horgan and Aaron Gillane with Séamus Callanan to come. Unquestionable ability and will continue to improve.

In the ruins of 2016 it looked unlikely that he’d still be involved three years later but from the Wexford Park match, when he scored a point and played well, he’s been back in favour. Type of 120 per cent player Cody loves.

Not as visible at midfield this year and recast as wing back. Another with bottomless commitment, his defensive instincts helped steady things against Cork but who would have expected him to trade gallops with Tom Morrissey in the Limerick semi-final?

He has played almost everywhere for Kilkenny but settled this season at centre back, which is a more fluid position these days. Deep lying forwards allow him to sweep at the back and get forward. Inspirational scores off his left.

Another versatile player, he sometimes can be over-ambitious but commitment can’t be faulted, like his extraordinary efforts in the semi-final to get in a hook on David Reidy’s late point, which didn’t quite get there and so wasn’t really noticed.

A revelation against Cork but mapped when captaining UCC in the Fitzgibbon. Latest in the Downey dynasty, he was remarkably physical against Limerick, knocking the daylights out of Will O’Donoghue, who’s a big man. Game needs a scoring touch, which he’s likely to develop.

One of the star players of recent years, an outstanding half back with extraordinary athletic ability, which has been a trump card throughout his career. Injury has been undermining his game for the past 12 months and although he featured against Limerick, he wasn’t himself.

Like Browne, he was involved in setting an aggressive tone from the start of the semi-final. A wing forward in the Eddie Brennan and Martin Comerford mode: athletic and tough. Hasn’t been prolific but kept pressure on Limerick half backs.

Needs to be man marked, which Limerick didn’t do - to their cost. Excellent in the air, he’s immaculate from placed balls, with that trademark trajectory, about a foot over the bar. Has been getting better support this championship. The best hurler I’ve seen.

Season undermined in the early stages by an ankle injury until coming on at half-time against Cork when he was excellent. I expect he’ll be a major factor. He’s a massive specimen, the first line of defence and a worry for Tipp.

Phenomenal since missing an early point against Galway and getting unceremoniously whipped off, having struggled initially to translate club form to county. He has a great hand, no matter how low or fast the ball is. Unselfish and has a big future.

Looked as if he might be approaching the end last year but scored amazing goal in club final and has been outstanding this season. Touch had been suspect but significantly better this year. Key player, a leader up front and a big danger in possession.

Early on, he struggled with chronic back injury and appeared anxious when he returned to the team. Scored well against Cork but in the semi-final, looked more stilted physically and his game suffered, which could set back his confidence. If best form is regained, he’s outstanding.