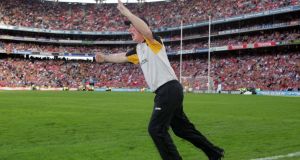 Cork were in hot pursuit of a three-in-a-row but as favourites hadn’t beaten Kilkenny since 1978. Cody had to cope with the loss of JJ Delaney in defence but had the game plan to thwart Cork’s familiar tactics.

Unyieldingly the champions tried the short ball and hand-passes that had marked the team’s rise to prominence and with it an unbeaten run stretching back 13 matches and over two years.

Every time a support runner was found he appeared to be surrounded by what looked like a clutch of Tyrone footballers in black-and-amber jerseys.

“Henry Shefflin must be the best hurler in the country, and yet his work ethic was incredible. His willingness to work for the team, rather than try to put up a big score for himself, summed up the spirit of Kilkenny and that’s what won it for them on the day.”

Having thwarted Kilkenny’s five-in-a-row ambitions in 2010, Tipperary had lost the following year’s final to Cody’s team. Yet this season had gone badly for the champions, who were left shell-shocked by a 10-point defeat in the Leinster final against Galway, followed by an unconvincing win over Limerick in the All-Ireland quarter-final.

Come this semi-final against the Munster champions though, Kilkenny’s claws were sharpened and they administered Tipp’s biggest championship defeat since 1897.

It was a controversial match, marred by indiscipline, and featuring a bizarre sideshow in which Lar Corbett, although being marked by Jackie Tyrrell, insisted on following Tommy Walsh around in a forlorn mission to antagonise him. Corbett’s team-mate Pa Bourke was the innocent bystander.

Tipperary manager Declan Ryan described it unconvincingly as “tactical” and Kilkenny powered on to retain the All-Ireland after a replay, avenging the Leinster final against Galway.

The drawn final had been the highest-scoring 70-miute final in history and was universally declared a classic, a Tipperary win narrowly averted by the Hawk-Eye adjudication on John O’Dwyer’s late free.

Having nearly pulled off a shock, Tipp opted for the same team but Cody’s selection for the replay made it clear that he hadn’t regarded drawing the match – regardless of it being a classic – as a good thing and made three changes.

In a far more controlled match, Kilkenny went man to man to counter the free movement by the Tipp forwards that had caused chaos in the drawn match. Kieran Joyce was called up for the first time in months and did such an effective job on Bonner Maher that he was named Man of the Match.

Another of the changes, John Power shared the goals with his brother Richie, as Kilkenny marked three All-Irelands in four championships just four years after narrowly failing to win five-in-a-row.

Probably the greatest of Cody’s coups, this year’s defeat of All-Ireland champions Limerick was achieved with an amalgamation of younger players and established winners in the veteran category.

Poor shooting by the champions didn’t help but they were outplayed and more significantly out-muscled in their main theatre of operations, the middle third.

Afterwards Cody delivered what sounded like a 20-year manifesto.

“Look, it’s either in a fella or it’s not. You can’t send out fellas there that you know in your heart and soul, are never going to be able to do that. The basic thing is you go out with total honesty first of all. You can talk about all the other things you like, essentially they’re in the county panel first of all because they’re well able to hurl, they’re good hurlers, they have plenty of skill and all the rest of it.”