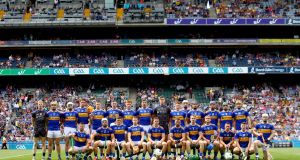 Tipperary ahead of their All-Ireland semi-final win over Wexford. Photograph: James Crombie/Inpho

Has paid his dues by fighting for the number one jersey. Excellent under pressure in the Munster final when his saves prevented a rout. Puck-outs could be quicker but he’s had a good year so far and established himself well on the team.

Back to full fitness and doing what he does best after the experiment of using him at midfield last year was shelved. He’s the ideal modern corner back, a tough marker and decisive defender and is back to his best form.

Has taken a while to fill out - I would have picked him out at Fitzgibbon but physical development has been slow. He has the height to take on Walter Walsh, as he showed against Lee Chin. Needs to watch discipline - nearly saw red in semi-final.

Is there such a thing as a full back in modern hurling with most teams playing two up? Likely to pick up Colin Fennelly. Excellent in that role against Conor McDonald. As a great striker off his left, he’s very confident receiving possession and terrific on line balls.

The team’s go-to man marker, as when he sat back on Aaron Gillane and curbed his influence. Since coming back from the cruciate, he has shown great desire and has been physically imposing this year. This season he has shown his best form for Tipp.

The bulwark of the defence. Inspirational in his catches and bursts from the back, for 10 years now. He’ll probably sit in central role and hit a lot of ball. Not quite as dominant this year and Tipp forwards need him on the front foot on Sunday.

He was outstanding against Wexford, very strong on the ball and a powerful worker at wing back. Also capable of finding a score, he’s developed into a really solid contributor to the team. Another with the physique to be a potential marker for Walter Walsh.

Really influential in Munster up until the final when he tailed off like the team but has recovered strongly. When John was sent off the last day, he found more space around the field. He’s helped Tipp adapt to the modern game. A key player.

Can look majestic on the run with the ball in front of him but doesn’t get involved enough for someone in the middle. If he could raise his game by getting on more ball, Tipp are well capable of winning the midfield battle.

Not the force he was in 2016 because of injury and his athleticism has been compromised and not as free moving in past two years. Second choice to Bonner Maher as the foraging forward but he has the strength to thrive in close-quarters combat with Kilkenny.

Outstanding against Cork but lapsed a bit afterwards. Moments of brilliance in his low catch against Limerick in Thurles and flicked pass to John McGrath the last day. Tipp’s most important forward just after half-time, getting scores and frees when Wexford looked capable of taking over.

Has suffered more than his fair share of injury and found it hard to pick up form. Great ball winner, he created an early goal for Séamus Callanan when Tipp were struggling against Wexford. Ideally suited to going toe to toe with Kilkenny half backs.

His free taking has improved and is proving very reliable after initial career wobbles. The consequent confidence has permeated his game and he has been the scoring threat his under-age and UL days suggested he’d be. Magnificent striker of a ball.

Could be the best year of his career. He set the tone in Cork going for goal immediately. Even on a grim day like the Munster final he nearly got three goals and his goal-a-game average is remarkable. Hurler of the Year elect if Tipp win.

A key contributor in 2016. Injuries haven’t helped but current form well below his best. Still dangerous: touched just one ball in the Munster final and got a goal. A big performance will bring more goals and a likely Tipp win. Unstoppable at his best.