Turning point: Something had to give in fiery battle between Hogan and Barrett 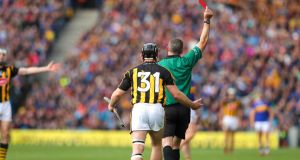 Kilkenny’s Richie Hogan receives a red card from referee James Owens towards the end of the first half of the All-Ireland hurling final at Croke Park. Photograph: Ryan Byrne/Inpho

By the time Richie Hogan came racing towards the sideline to close in Cathal Barrett, the afternoon had already turned wild and frayed.

The pre-match narrative was that Kilkenny would tear into Tipperary with something close to abandon to test their moral fibre. Getting under Tipp’s skin has been a speciality of the Kilkenny collective throughout this decade and throughout the week, the prospect of a series of fiery and unrelenting individual battles throughout the field was anticipated.

Sparks were expected to fly between Barrett and Hogan in the left corner of the field. Their match-up was intriguing; one of Kilkenny’s most explosive and experienced attackers against the wiry, sweeping Barrett, whose influence on Tipp’s full-back line is profound. So it went.

In the 17th minute, Hogan had wandered infield to make himself available for the ball and was clattered by his marker as soon as he received possession. The play meant another routine score for TJ Reid, who made no fuss of translating the series of fouls coughed up by the Tipp defence into a Kilkenny lead that stretched to five at one stage.

But Hogan was exercised by the ferocity of the challenge, removing his helmet to reveal a cut to his face. It required a blood substitution and the day stayed frantic and intense as the Danesfort man was quickly treated.

Still, the memory and pain of the incident might well have informed his attitude as he closed in on Barrett. The first half hour had been hectic and torrential August downpours gave the game a slightly chaotic feel. So with Barrett lining up to effect a clearance, Hogan wanted to put him out over the sideline with interest.

The Holycross-Ballycahill man is as evasive as they come and stepped inside Hogan as he arrived. Hogan allowed his elbow to stray towards his opponent as he flew past and unfortunately for him, it connected.

In real time, it didn’t look like much, On RTÉ radio, John Mullane dismissed the event, suggesting that referee should “move on the with the game.” But the replays made him review his decision. You could hear it in his voice: he was uncertain. Maybe Hogan could be in trouble here. Maybe not.

A long lull followed while referee James Owens consulted Johnny Murphy, the sideline official. It was obvious then that Hogan was probably going to be disciplined. Brian Cody was standing close to where the foul had occurred and afterwards kept his counsel about the decision, pointing out only that the referee himself had been slow to come to his conclusion.

“Nobody seems to know. I was close to it. I was amazed. But I am the manager of the Kilkenny hurling team. I didn’t really know, I hadn’t a clue to be honest. The only thing I will say is that we are not going to make excuses. But it is a huge decision to make, to issue a red card. You would want to be very definite before you make a decision like that and certainly it took the referee a long, long time to make up his mind.”

When the red card was shown on the big screens, it caused a tremor of shock around Croke Park. In that instance, everything changed. Minutes after Hogan’s dismissal, Barrett had been involved in a heavy challenge with Adrian Mullen from which the young Ballyhale man walked away limping.

By then, Tipp had settled into the game through Niall O’Meara’s spellbinding goal. The early fury with which Kilkenny had met Tipperary hadn’t produced any lasting advantage on the scoreboard. When the second half resumed, Barrett was used in the free role. Kilkenny briefly restored parity – again through a Reid free, but after that the contest quickly shifted irreversibly in Tipp’s favour as the space opened up for them.

“To play a man down for such a long period is always going to be a difficult, difficult assignment,” Liam Sheedy acknowledged afterwards of Kilkenny’s predicament.

“For a long period of that first half, we were gasping for air to be honest. We needed the goal when we got it: an individual piece of brilliance by Niall [O’Meara] and at half-time, we felt we hadn’t really found our flow or get to the pitch of it. And we spoke about what we wanted to achieve in the second half and what we wanted to find.”

When they tapped into that peerless frequency of theirs, Tipperary looked untouchable. At times, they slipped into a game that was less a demolition of Kilkenny than a celebration of their own potential. But it was impossible not to feel sympathy for Hogan as he sat on the substitutes’ bench, his face bloodied and cut and his mind doubtlessly reeling.

Hogan’s rich history with Kilkenny is predicated on his creative ability and the forward thrust of his compact, powerful game. Around the country and in the television studios, opinion was instantly split on whether his challenge merited a red card.

Once he raised his elbow, he was placing himself in dangerous territory. In real time, it happened in a flash. It might have been foolish but equally, it was hard to see any malicious intent. All of that was academic. It was a tough place for the Danesfort man to find himself.

In all the forecasts and predictions, nobody had foreseen a match in which a 14-man Kilkenny team would be forced to try and live with Tipperary.

“The majority view was that for us to take on 15 on 15 was going to be very difficult,” Cody said flatly.