Hopeless panel tell us not to mind the drive for five, it’ll be ‘seven is heaven’ soon enough 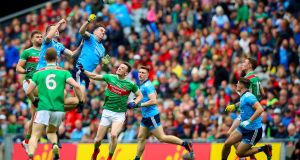 Mayo were no match for Dublin, the RTE panel would tell us that nobody are, or will be. Photograph: Tommy Dickson/Inpho

“It’s the hope,” Joanne Cantwell had reminded us at half-time, “that kills you”, the only consolation this time around for the Mayo faithful the fact that their hope had been slain within 10-ish minutes of the re-start, so at least it hadn’t stretched to the dying moments as it had done so often before, like it had been fed through a medieval torture machine.

Not that the faithful needed to be told that a highly lively and encouraging start against Dublin would necessarily end in rapture, but on the off-chance that they’d forgotten their recent history Tomas O’Se, while doffing his cap to Mayo’s “brilliant” first half, issued the equivalent of a Met Eireann Status, well, Blue warning.

“My only worry for them is that . . . they’ve been in this place before,” he said, adding a little grimace that suggested he feared the Dubs would come out with all AK-47s blazing after the break. His fear was well-founded, this was the most brutal shoot-‘em-up since, possibly, The Good, The Bad and The Ugly.

Pre-match, the panel had their doubts about Mayo’s ability to put it up to the Dubs, even if, they agreed, the Dubs hadn’t been truly tested since the 2017 final, so would hardly be battle-hardened.

Still, they took one look at their bench, which read like a Who’s Who of Gaelic Football, Colm O’Rourke recalling Bill Shankly’s response to that query about ‘who’s the second best team in England?’ (“Liverpool’s reserves”).

So, “can you see Mayo winning,” asked Joanne.

Team news. Whichever unfortunate soul submits the declared starting XVs for publication in the match programme should really opt instead for text along the lines of, ‘who the **** knows?!’

“This has a feel of an All Ireland final,” Kevin McStay noted as the players paraded about the place, all the while Kerry and Tyrone finding their inner Simple Minds - ‘helloooooooo: don’t you [DUM DE DUM]…. forget about me’ - in the face of the intimation that Sam would be presented to Saturday’s victors.

Up and running, Mayo majestic, in a snarly lion-hunting-gazelle kind of way.

Two points up at the break. “They’re like a team possessed,” Colm purred, “unrelenting ferocity, they’re playing on the edge.”

Joe concurred, but observed that despite the fact that the Dubs had been annihilated on the intensity front, they were only two points behind. And there was no Met Eireann warning sufficient to alert Mayo to the carnage to come.

And then the carnage came, 2-7 without reply in the opening 12-ish minutes of the second half, Con O’Callaghan taking the mickey, Kevin left to surmise that there had been “a recalibration” in the Dublin dressing room at half-time. The mother of all recalibrations, that. Dublin were so comfy in the closing stages they were even able to bring on the promising Diarmuid Connolly, who looks to have a bright future in the game.

“Jesus, scary is the word,” said Tomas come full-time, so petrifying, in fact, that he didn’t entirely dismiss Joe’s suspicion that he’d be happy out if Kerry lost by a point to Tyrone come Sunday, thereby leaving the honour of being pulverised in the final by the Dubs to the Ulster men.

“That’s the most vicious 10 minutes I’ve ever seen from a Gaelic football team,” said Joe, “that was the blitzkrieg.”

And then he snapped at Joanne when she tried to interrupt another soliloquy about how much charity work the Dublin players do by pointing out that the Mayo lads probably do much the same, Joe peeved to be told that lots of other folk love kittens too.

Tomas, meanwhile, was having kittens. “It’s actually demoralising,” he said of Dublin’s second half display, reckoning everyone else was just battling for second place. Colm couldn’t argue with the point. “Maybe the gap is getting bigger all the time, there’s no sign of Dublin being sated by their success… we could be here talking about a seven-in-a-row.”

Never mind the drive for five, then, it’ll be ‘seven is heaven’ soon enough.

Joe even suggested that there was no point playing the second semi-final. You’d half guess Kerry and Tyrone will glue that opinion to their dressing room walls come Sunday. It’s the hope that’ll sustain them. Until it, possibly, kills them.