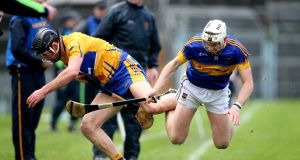 Tipperary’s Brendan Maher with a big hit on Cathal Malone of Clare as the sliotar goes out of play during their Allianz NHL Division 1A clash. Photo: Cathal Noonan/Inpho

Michael Ryan looked amused by it all. The Tipperary manager had just seen his team win for the third time in the Allianz Hurling League in what was their first match in Semple Stadium since last June and he prepared himself for the now routine questions about how serious Tipp are this year about defending the All-Ireland in style.

And he was sceptical: “We’ve arrived in a great position today, thankfully. We approached the league the same way we always do. I hate to tell you lads but that’s exactly how we’ve approached it every year but results didn’t follow us.”

On Sunday the outcomes continued to be more biddable. An intermittent but determined Clare challenge managed on a couple of occasions to pull the match within their reach but overall Tipp always seemed in control.

They had to make changes before the start. James Barry had been unable to train all week with a heavy cold and his place went to captain, Pádraic Maher, who came off the bench to start with Tomás Hamill switching to full back where he was dogged enough to get the TG4 Man of the Match award.

Although they allowed a five-point lead evaporate in the first half and trailed by one at the break, the All-Ireland champions had the wind in the second half and harnessed it to good effect.

The match began with Tipperary producing a starburst of scores to lead by five points to nil in the opening seven minutes. John McGrath laid down a marker with a couple from play – his first having killed a long strike from Brendan Maher dead on his hurl and firing it over.

McGrath ended the day with 0-10, half of them from play, and gave Cian Dillon a stressful afternoon.

In the difficult conditions, cold with occasional downpours, Tipperary’s stick work was sharper and more assured. Steven O’Brien logged another good display with a couple of early points and when John O’Dwyer found his range the home side’s scoring outlets exerted relentless pressure on Clare.

At a certain point though the urgency seemed to drain away and the visitors responded. Podge Collins was perpetual motion, his running causing plenty of problem s and his shooting registering points and drawing a foul for a converted free. John Conlon at wing forward sprang into prominence after the first 15 minutes and whistled four points over the bar before the break.

Tipperary didn’t help themselves by hitting some very loose clearances and inviting their reinvigorated opponents back into the contest. David Reidy’s flawless free taking also helped run the scoreboard back in Clare’s favour and he equalised at 0-8 each in the 25th minute.

They conceded only two points in the 20 minutes from the 14th and made enough headway to lead by three but although Tipp trailed by a point at the interval the last two points from Niall O’Meara and a McGrath free tilted the momentum their way.

So it proved on the re-start. O’Dwyer levelled and after Ronan Maher pointed a whopping free from his own half, the lead changed hands for the last time. Tipperary’s superior ability to tip the pedal and cruise clear was evident in a 12-minute blast which saw them out-score Clare by 0-6 to 0-1.

One of the visitors’ joint-managers Donal Moloney was pleased with what happened next in that his team dug in once more and prevented the match from running away from them.

Twice they clipped the margin back to a single score.

“We made substitutions and got it back to three points but irrespective of the substitutions Tipp pulled away in the last four or five minutes. In terms of the forwards, some of them put in huge shifts and huge work-rate.”

Ian Galvin (whose brother Colm’s possible return to the panel was treated rather vaguely by Moloney afterwards – “Our panel is open and will continue to be so and that’s the way it is”) was the prime example and rattled off three points having entered the f ray in the 59th minute and the third of them reduced the deficit to 0-20 to 0-23 with a frisson rippling around the crowd of 7,254 as the fourth official signalled five minutes of injury-time (mostly the result of a worrying looking knee injury picked up by Clare corner back Oisín O’Brien).

The suspicion though that Tipperary were always playing within themselves strengthened when they fired over five points in those concluding five minutes to just a solitary response from Clare.

The winners also had injury concerns. Last year’s captain Brendan Maher went off with shoulder injury whereas corner back Donagh Maher was removed with suspected concussion.

Next up for Tipp is a revisiting of last year’s All-Ireland. “We love a chance to play Kilkenny,” said Ryan; “they’re always ding-dong battles so we’ll be trying to give up nothing.”