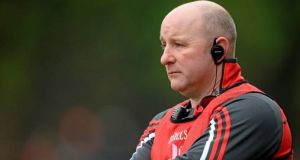 “I’d say two points from our last three games would get the job done,” he conceded after a battling win over Antrim in Drogheda. “We have Armagh and Sligo here and Tipperary away, and they’re not easy fixtures, but I think 10 points should get us over the line.

An early Eoin O’Connor goal for the hosts was cancelled out by a deflected Ryan Murray strike as Louth adjourned at half-time with a slender 1-3 to 1-1 lead.

They held an improved Antrim side at bay after the break before Ryan Burns won and converted a penalty on 50 minutes, making it 2-7 to 1-5.

Antrim didn’t make any headway until injury-time when they closed the gap to two, but Louth held on for a deserved win and Kelly heaped praise on his players for defying the odds this season.

“We’ve played a lot of teams this year. It’s eight or nine games now, and we’ve lost once to Dublin, so these guys don’t lose games easily “It’s a great place to be – four wins from four – who would have thought it? We certainly did inside the dressing room, but I wouldn’t say too many outside those four walls would have expected it.”

Armagh thrust themselves forcibly into the Division Three promotion frame when they demolished a naïve, inexperienced Offaly side at the Athletic Grounds on Sunday.

Long before referee Rory Hickey sounded his final whistle, the destination of the two points was assured as the host side took up residence on easy street.

By half-time, Armagh had already pocketed victory. With just five minutes gone they led by 1-5 to nil, their goal coming from Niall Rowland and when Stefan Campbell and Niall Grimley tucked away further goals they led by 3-11 to 0-6 at half-time.

The avalanche continued after the break when Andrew Murnin, Rory Grugan and Anthony Duffy extended the goal blitz which was complemented by a battery of points.

Nigel Dunne, Bernard Allen and Eoin Carroll tried valiantly to salvage a modicum of Offaly pride but found themselves swimming against the tide as the home side careered to an embarrassingly one-sided victory.

Sligo came from seven down to claim the points against 14-man Laois in a cracking contest at Markievicz Park.

Second half scores from captain Neil Ewing, vice-captain Keelan Cawley and man of the match Niall Murphy edged the Yeats men to a vital win.

The early loss of Colm Begley to injury and the sending-off of Kevin Meaney with a straight red card on 34 minutes proved costly for the midlanders, who still managed to lead by 2-6 to 0-7 at half-time.

Goals from Donie and Paul Kingston had the visitors in the ascendancy, with Paul Kingston’s goal opening his side’s account after 13 minutes.

Sligo’s first score only came three minutes before that, but Murphy, Stephen Coen and Adrian Marren all pointed for the hosts before the break, while David Conway, Stephen Attride and Niall Donoher joined the Kingstons on the Laois scoresheet.

A superb Aidan Devaney save denied Darren Strong what looked like a certain third goal for Laois, and Sligo got on top in the second half.

They only managed to pull level through substitute Cian Breheny in the 65th minute, but they went ahead thanks to another sub, Stephen Gilmartin, shortly after.

Donie Kingston had a late chance to level it, but his long-range free dropped short, and Ewing’s point insured the victory for Niall Carew’s side.

Tipperary versus Longford was postponed - with Semple Stadium unable to host two games (hurling vs Clare was played on Sunday) due to recent weather conditions. The refixture will take place on Sunday week at the same venue.