Clare pull off Cork scalp - and without Gary Brennan 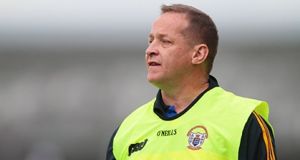 The Clare footballers pulled off a famous, and emphatic, win over Munster rivals Cork at Cusack Park, Ennis on Sunday.

The scalp is even more impressive when you consider that Clare were without their injured talisman, midfielder Gary Brennan.

Nonetheless they had eight points to spare against the Rebels, consigning the visitors to the relegation zone in Division Two.

Cork dominated the possession stakes in a low-scoring opening half - building a 0-3 to no score lead early on.

Clare opened their account however with a Cian O’Dea goal, before quickly taking the lead when Eoin Cleary raised their first white flag. The Banner maintained their one point lead for much of the first half but at the interval the scoreboard read Clare 1-2 Cork 0-5.

The home side regained that advantage within 20 seconds of the re-start when Shane Brennan combined with Dean Ryan and David Tubridy for a fine point.

Clare continued to push on, by now dominating the possession battle, and unlike Cork in the first half, using it to their advantage.

They picked off some good points, quietly building a lead and frustrating Peadar Healy’s men.

The two points were then sealed when with four minutes on the clock, livewire Jamie Malone bagged a second goal. He raced through the centre of the Cork defence and passed to substitute David Egan, his shot was blocked but Malone made no mistake from the follow up.

Cork did have a chance to reduce the deficit in injury time but Colm O’Neill’s penalty hit the post before being saved by ‘keeper Joe Hayes.