Tipp wipe the floor with Dublin as Cunningham bows out

Defending champions make the most of home comforts with crushing win 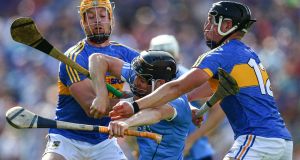 Ger Cunningham’s three-year spell as Dublin senior hurling manager came to a shuddering halt as the Sky Blues suffered a 22-point whipping against Dublin on Saturday.

Cunningham admits that he was left “shell-shocked” by the heavy defeat, adding that he didn’t see it coming.

Dublin posted 2-28 in their previous outing against an admittedly decimated Laois outfit, while Tipp flattered to deceive before struggling past Westmeath with 11 points to spare.

But a week on, Dublin were rudderless and set up to fail at the back, while Tipp found some form again, with their manager Michael Ryan acknowledging that he saw “glimpses” of what his potent attack is capable of.

Champions Tipp blasted out an ominous statement of intent ahead of the All-Ireland quarter-finals - as Seamus Callanan helped himself to 3-11.

Callanan, John McGrath and John ‘Bubbles’ O’Dwyer tormented Dublin, who made life hard for themselves by not playing an extra man at the back, while also defending dismally.

And with Dublin county board set to confirm Cunningham’s exit imminently, the former Cork goalkeeper admitted that his time is up.

He said: “My term is up, it’s time now just to chat in relation to the game, how it panned out. We hadn’t expected that in any shape or form. I’m still kind of shell-shocked on the game, we’ll reflect on that and see where we go.”

Dublin had their moments, particularly in the first half when Cian O’Sullivan cut through for a goal, and they could have at least one more.

Cunningham was right in his post-match assertion that much of the damage was self-inflicted. Even a defender rated as one of the best in the country in his position, full-back Eoghan O’Donnell, suffered badly as Callanan ran riot.

Tipp skipper Pádraic Maher played a ‘Tom Brady’ role from deep and the quality of regular ball inside was high.

The writing was on the wall early, as Callanan had 1-3 posted inside eight minutes.

He scooted away from O’Donnell for an eighth minute goal and while O’Sullivan’s 15th-minute effort had Dublin level at 1-4 each, that was as good as it got.

John McGrath netted twice, the first after Dublin failed to clear a long Maher delivery, before Callanan turned over Shane Barrett and supplied the assist for McGrath’s second.

A poor restart led to Callanan’s second goal, as he whipped home from a tight angle after Patrick ‘Bonner’ Maher created the opening.

Cunningham said: “We were contemplating shoring it up for the first 10 minutes of the second half but we felt that wasn’t the message to give. We felt we had to attack and try to get back into the game.

“Within 30 seconds, there was a goal gone in. The game was done and dusted and they played exhibition hurling for the second half.”

With the second half only 19 seconds old, Mikey Breen had Tipp’s fifth goal before O’Dwyer, who could have gone himself, set up Callanan for his hat-trick effort in the final minute.

David Treacy kept the flag, and white flags, flying for Dublin but he was curiously whipped off late on.

Cuala’s All-Ireland club winning manager Mattie Kenny has been touted as a possible replacement for Cunningham, while the names of former manager Anthony Daly and current Waterford boss Derek McGrath have also been mentioned.

Ryan, meanwhile, was asked about the performance of his forward line, and nodded with satisfaction. He reflected: “These guys are very potent. That’s an unfortunate scoreline against Dublin, to be honest.

“We just wanted to get these guys into the groove again, get them play hurling and become a little bit more ruthless. They showed glimpses of that out there today.”

Tipp will only get better, one suspects, but it’s very much back to the drawing board for Dublin on the back of this spectacular collapse.

1 Sideline Cut: Vignette shows why Bird is the true shark in The Last Dance
2 Argentina rugby great Hugo Porta continues to give back to his beloved game
3 World Rugby study advises removal of reset scrums to reduce Covid-19 risk
4 Decisions to be made on where to run Guineas and Derby horses
5 America at Large: George Karl lifts the lid on drug use within the NBA
Real news has value SUBSCRIBE