All-Ireland SHC Qualifier: Kilkenny were out-hurled both in normal and extra-time 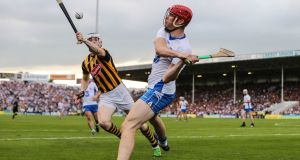 Waterford’s Tadhg de Burca gets his shot away despite pressure from TJ Reid of Kilkenny at Semple Stadium, Thurles. Photograph: Cathal Noonan/Inpho

There is no easy way of recounting what unfolded at Semple Stadium on Saturday evening, except that it felt like 58 years of suppression being unleashed in a little over 20 minutes of armed rebellion. The 2017 An Déise Rising has begun.

It didn’t go exactly to plan, surviving a near perfect ambush at the end of normal time, yet once the extra clock started ticking Waterford made victory all their own – only their second ever championship win over Kilkenny and their first since the 1959 All-Ireland final replay.

That being the year of Waterford’s last outright title win too, the 58-year reference will live on for a while yet, but for now an All-Ireland quarter-final awaits on Sunday week; no more fear of Kilkenny, no more moral victories, no more questioning of Waterford’s appetite for battle.

For Kilkenny, no more raging against the dying of the light, this being the first time they’ve failed to reach the All-Ireland quarter-finals or semi-finals since the hurling championship opened its back door, 20 years ago. It may not mean no more Brian Cody, but after 19 seasons in charge, has he the appetite to go again?

No such worries for Derek McGrath, possibly not the calmest Waterford man in Semple Stadium, certainly the most satisfied.

“Well, yeah, the 58 years thing was spoken about,” admitted the Waterford manager. “We referenced it last Monday, when the draw was made, then we just turned all the focus to the play. We felt that might burdened some teams over the years, concentrating on the whole 58 years thing, but this group have come on in terms of their whole approach, I don’t think they’re fuelled by that any more.

“We’re in the quarter-final now, but I suppose we’re advanced in terms of the opposition we’ve beaten. The challenge for us it to just take it on again. That’s the reality. There’s nothing easy ahead of us. We’d be hoping there’ll be some confidence gained from what happened here, but we’ll enjoy it for a night, have a few pints, I think the lads deserve it.”

For the last two summers it seemed like love couldn’t tear these teams apart and this time it felt more like a force of destiny:  brilliantly executed goals in either period of extra-time – the first from Jamie Barron, the second from Maurice Shanahan – is what ultimately decided the contest, but it was a game Waterford should have won, had won, in normal time, before Kilkenny did what only can Kilkenny can do.

Trailing by eight points, 2-15 to 1-10 going into the last 10 minutes, Kilkenny suddenly pitched tents for their own rebellion. Substitute Lester Ryan kicked things off, before their goal on 67 minutes began the charge, finished by TJ Reid despite what looked like some barging from Colin Fennelly.

Up popped under-21 standout Richie Leahy to close the gap to one, before Colin Fennelly levelled it. A last-minute free could still have won it for Waterford at that stage, only free-taker Pauric Mahony had just been replacement, injured, so instead Shanahan eagerly stepped up, only to see his shot drift narrowly right and wide.

“Initially we just had to gather our own thoughts as a management,” explained McGrath. “Pauric (Mahony) couldn’t walk but we were toying with the idea of bringing him back in for the actual free in the last minute (of normal time) just in terms of his overall radar.

“We were kind of saying, ‘Jesus, this is going to come back to haunt us’, to be perfectly honest. Then we needed to lift ourselves, body language, and the overall approach. It was a heads down approach, go play by play again

“The pleasing thing from our point of view is the likes of Maurice (Shanahan), Brian O’Halloran, Tommy Ryan, any modicum of doubt at the end of normal time was put to bed by the performance of the subs in extra-time which is really pleasing. Talk is cheap, but when fellas out and do it, it’s a different scenario. So I think we were good value for the win overall, albeit we did it the hard way.”

Kilkenny were properly out-hurled in extra-time, but in truth for most of the contest too: Austin Gleeson shot a brilliant 0-5; Tadhg de Búrca was perfect in his sweeping role, and earlier goals from Shane Bennett and Micheal ‘Brick’ Walsh more than justified their victory. Darragh Fives was also swallowing ball at will, Pauric Mahony’s consistency with the placed ball helping build Waterford’s early advantage.

For Kilkenny, too many marquee players failed to show: Reid finished with an impeccable 2-12, including a first-half penalty when they needed it most, but Richie Hogan was again replaced (although briefly reappeared in extra-time), Michael Fennelly was a shadow of his old self, and despite some true heroics in defence, they eventually succumbed to Waterford’s brute determination.

“Well, extra-time was obviously the difference,” said Cody, “but they (Waterford) were more consistent in their play over the 90 minutes than we were, but the resilience, spirit and determination we showed are the hallmarks of everything a team has to have.

“Our team has been questioned over the year by just about everybody really. That’s their prerogative, but our team tonight was as competitive as is humanly possible to be, and came within a whisker of winning the game. I think they proved tonight how resilient they are, how competitive they are, how determined they are, and also how skilful they are.

“But I don’t discuss injuries or players, because then you’re making excuses, and the only reason we lost that game was because Waterford were the better team.”

As for his own future as manager, Cody typically waits until November until making any call: “The plan is to be around in November, for sure,” he said stoically. “But my future is totally irrelevant, the future of Kilkenny hurling is very, very secure.”

There may however be some more immediate concerns for Cody, as in the 16th minute, he was seen to lay his hands on the fourth official, Wexford’s Justin Heffernan, when contesting a sideline ball. The implications of that will only be known in due course, but it wasn’t dealt with on the night.