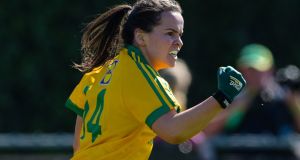 McLaughlin landed 2-6 as Donegal claimed the silverware back from last year’s winners.

Donegal went to Monaghan’s Clones backyard and announced themselves as All-Ireland contenders with an impressive win.

In what was a repeat of the 2015 decider, beaten Lidl League Division 1 finalists Donegal emerged victorious to once again book an All-Ireland quarter-final spot.

Friel struck for the opening goal in the fourth minute, and when McMonagle flicked home their second 10 minutes later, the warning signs were already flashing for Monaghan.

A lethal Donegal forward line meant business while, at the other end, the team were also defensively sound.

Ellen McCarron, who finished with eight points, kept Monaghan in touch, while the Farney girls had goalkeeper Linda Martin to thank for some fine saves.

Monaghan had goal chances of their own, but McLaughlin struck as half-time approached and Donegal were 3-5 to 0-9 clear at the break.

McLaughlin bagged her second goal three minutes after the restart and Monaghan were left with a mountain to climb.

Donegal lost Niamh Hegarty to the sin-bin but held tight to the finish.

Monaghan, who had penalty claims waved away when Laura McEnaney appeared to have been fouled, had Gráinne McNally yellow-carded in the second-half.