Donegal, Meath and Monaghan should progress from pick of the All-Ireland qualifiers 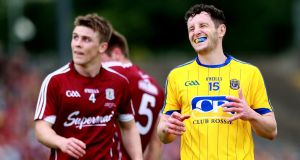 The question this weekend is whether Kevin Walsh will go with a cautious, defensive configuration or reflect on the success of going for Roscommon’s throat in last year’s replay. On the basis that the Galway manager rarely sees an opposition attack that doesn’t make him anxious, caution is the likely watchword.

Roscommon do have good forwards in the Murtaghs – Ciarán was a one-man resistance for a while in last year’s replay and Diarmuid is in form – and ran up a record score against an admittedly compliant Leitrim but will have to function here with a sizeable reduction in possession. Enda Smith is expected to supplement centrefield but he is a valuable forward to tie up that deep.

Conor Devaney played a mobile, free role to lethal effect the last day but the same space is unlikely to open up this weekend.

Galway’s defensive set-up wasn’t fully functioning against Mayo in that although they dropped back, there were surprising gaps in front of the full-back line that if repeated Roscommon can exploit and by the end of the match the near-miss short kick-outs were causing communal palpitations among the home support.

This was curious given the team’s ability to compete even with a high-end centrefield like Mayo’s. On Sunday against a less imposing combination the champions can afford to go long more often with Paul Conroy, Fiontán Ó Curraoin and Tom Flynn in that sector.

Against Mayo even with the wind – and the Salthill wind at that – Galway were reluctant to commit forwards in support of Damien Comer who was winning noteworthy amounts of ball although outnumbered.

There are a range of ways in which the champions can successfully retain their title but for Roscommon there is no route to success without tightening at the back. Galway’s advantage in the middle and quality up front will be decisive.

All-Ireland SFC qualifiers – Round 3A

A first ever meeting between these counties ought to bring a rattling good crowd to Cusack Park. In its own way, a now-or-never game for both sides. For Clare to kick on, they need to take a scalp and this is as big a one they could feasibly target. That it’s not entirely out of the question speaks to a general sense of the dying of the Mayo light. But then, we’ve heard that before.

Clare are clearly nobody’s light touch or surprise packet. If they were playing Derry here, you’d make them favourites. But even without suspended Paddy Durcan, Mayo have too much on deposit to go broke this early in the summer.

Fair to say you wouldn’t be handing over the deeds to your house in support of either of these sides just now. They’re probably neck and neck in terms of failing to live up to pre-Championship billing. Patrick McBrearty showed signs of rounding into form against Longford but otherwise Donegal have a betwixt and between look about them, their experienced heads less potent than of old, their younger bucks still finding their way.

That said, Meath haven’t beaten an Ulster team in the Championship since Tyrone in 2007 and haven’t historically looked comfortable against massed defences. Donegal can come through.

All-Ireland SFC Qualifiers – Round 2B

Though clear and obvious favourites, Monaghan have had a wretched qualifier record this decade, with only one win outside the Ulster championship since 2009 and defeats to Offaly, Laois and Longford on their rap-sheet. Wexford were blessed that Limerick didn’t take their chances the last day but even accounting for Banty McEnaney’s inside knowledge, this should be too much.

Perennial rivals in Division Four, Leitrim have generally had the upper hand between these two, with eight wins in their last 10 meetings. And yet Carlow go in as favourites, most likely because they were on TV putting up a fight against Dublin. We’ll go with Leitrim, who beat London far more convincingly than Carlow did.

Tipp seem to have been written off here purely on account of their absentees. But they very nearly beat Cork despite everything the last day and Cavan are surely no more fearsome a prospect, especially give their poor home record. Cavan have lost qualifiers in Breffni Park to Derry, Roscommon (twice), Kildare and Longford in recent years. They can survive the loss of Michael Quinlivan.

Another first-time match-up in championship, albeit they’ve met four times in the league over the past decade, with honours even. Westmeath took a shot to nothing against Dublin and surely won’t be as abject again. Armagh seemed to hit a groove against Fermanagh and go in here as favourites. But at 5/2, Westmeath are surely worth a punt.