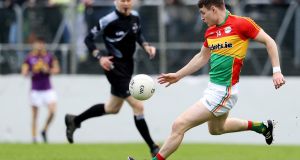 Carlow footballers earned a fifth championship outing this summer after Turlough O’Brien’s side came with a strong second-half surge to turn a two-point half-time deficit into a seven-point victory in this Round 2B football qualifier at Netwatch Cullen Park.

A crowd of 3,000 came to watch the first ever championship meeting between these counties. Leitrim bossed the opening 20 minutes and went 0-6 to 0-2 in front by that stage with forwards Ryan O’Rourke and Ronan Kennedy causing serious problems for the home defence. The visitors were dominating midfield in that opening half, Carlow feeling the loss of the suspended Brendan Murphy.

However, Brendan Guckian’s men suffered a serious setback when they lost the influential Dean McGovern to a black card on 33 minutes.

Carlow were fluffing their lines in front of goal and missed three decent first-half goal chances – a brilliant save by Leitrim goalkeeper Brendan Flynn denied Carlow’s top forward Paul Broderick a certain goal on 27 minutes as the western county led 0-9 to 0-7 at the break.

Carlow were the dominant side in the second half and had drawn level before a penetrating run from midfielder Seán Murphy set up a well-taken goal for Broderick to put Carlow 1-9 to 0-9 in front on 44 minutes.

Both sides finished with 14 men after Carlow right full back Chris Crowley and his opposite number, Brendan Gallagher, received straight red cards late in the game.