Rusty Galway take their time before blowing Offaly away 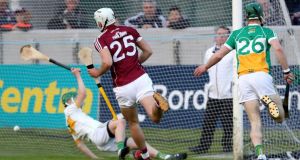 An untidy night’s work from Galway and yet look at the scoreboard. They stuck five goals on an Offaly team for whom goalkeeper Eoghan Cahill put in a trojan effort, pulling off three brilliant saves from Joe Canning alone. The All-Ireland champions were never particularly fluid here but they did the needful all the same.

Second-half goals from Conor Whelan, Brian Concannon and Jason Flynn hooshed them out of harm’s way. In front of a crowd of 8,300, Offaly put up a grand showing without ever threatening the result. In the fortnight between now and Kilkenny’s visit to Pearse Stadium, Micheál Donoghue will be happy his side have plenty to work on.

The advance notice of Offaly’s new-found stickability and defiance proved on the money for good spells of the evening. It wasn’t all lusty tearing into the All-Ireland champions either - although there was enough of that, too. Gone was the desperate double-sweeper gambit of last year. Instead, Offaly’s defenders invaded the personal space of every Galway attacker, with the sore-thumb exception of Joseph Cooney.

And when they got a stick in here and there to turn over possession, they didn’t panic with it. They frequently looked to draw a man and dish off a handpass to a runner in support, who in turn looked to hit long diagonals into the full-forward line for Joe Bergin, Shane Dooley and Dan Currams to go after. It didn’t always work but it hinted at better things to come.

All of which is all very well right up until it isn’t. Offaly’s general neatness was in need of a bit of sexing up on the scoreboard. Alas for them, their radar was off just when they were at their best in other departments. Nine first-half wides was a handicap they couldn’t afford to carry.

Though Galway weren’t in lights-out form themselves, the obvious difference was in their more clinical tendencies in front of goal. Joseph Cooney was rampant early, swishing points in a world of space. Debutant Brian Concannon bundled home the first goal after Conor Whelan’s shot pinged back off a post, Joe Canning potted his frees.

That said, Galway’s advantage was only a couple of points in the lead-up to half-time. Cahill’s penalty save in the 10th minute got turbo-boosted within 40 seconds when Offaly went down the other end of the pitch and banged home a goal of their own. Oisin Kelly made a determined run through the middle before scooping a clever handpass to Shane Dooley who roofed his shot.

It allowed the home side to nip and tuck their way to within sight of the break. But Cooney’s goal put clear water between the sides, the Galway wing-forward galloping onto a Whelan handpass in the 34th minute and planting a low shot into the corner of Cahill’s net.

A five-point lead was always going to be the sort of cushion that Galway would revel in as the game progressed. Canning had been quiet in the first half but came into matters more after the restart. Likewise, Whelan’s opening period had been a scrappy one but his Aussie Rules-style catch and subsequent handpass to lay on the third goal for Concannon in the 43rd minute presaged a much better showing from him thereafter.

It also put the tin lid on the game. Concannon’s second goal made it 3-11 to 1-8 and understandably doused the fire in Offaly. A Joe Bergin goal raised a cheer in the crowd and Dooley’s frees were for the most part unerring but this was over as a contest long before the end. Goals for Whelan and Flynn and another couple of blinding saves from Cahill were the sum total of could hold the interest for the rest of the night.