Defiant Andy McEntee will embrace a date with the Dubs 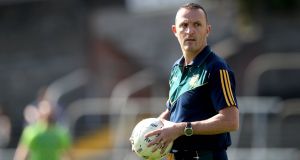 As the last team to actually beat Dublin in the Leinster football championship, eight years ago already, Meath are perfectly entitled to believe they can do it again. Andy McEntee - in his second season as Meath manager - isn’t making such bold predictions but all he he is saying is give hope a chance.

Because the one thing that definitely won’t beat Dublin, he says, is negativity: Meath last drew blood in the 2010 Leinster semi-final, hitting Dublin where it hurts with five goals to none (5-9 to 0-13), and not many people saw that defeat coming (without which Dublin would be going for 14 successive provincial titles). Even with Dublin now chasing a record eighth title in succession, that doesn’t mean Meath don’t have a chance.

“Why not?” says McEntee, answering the question with the question. “It’s very easy to say, ‘ah sure Dublin are too good, what’s the point in doing all of this’. Where’s the challenge in that?

Indeed Meath goalkeeper Paddy O’Rourke, still only 28, opted out of the senior panel last November, citing that exact lack of hope: “So I finally came to a decision: this is not worth it. How can you justify training five or six nights per week for eight or nine months of the year, without a realistic chance of winning anything? I just can’t do it anymore.”

For McEntee this is visibly rankling: “I think there’s huge negativity out there, far too much talk in the media about it, from former players, about the demands of modern intercounty football”, says McEntee, who managed the Meath minors to Leinster and All-Ireland finals in 2012, and in 2016 guided Ballyboden St Enda’s to a first All-Ireland club title.

“If you want to play your sport at the highest level, you’ve got to put in the hours. John Coghlan is our physical trainer, and he’s from an athletics background, and he will tell you a good club athlete trains eight or nine hours a week. You’ve got to put in the effort, the hours. You sign up for it, and if you don’t want it, walk away. It’s not too much time and effort. It’s always been the same. I was involved with Meath in the late 80s and 90s, and there was huge effort put in back then. That’s every sport, not just GAA.

“And players are better off now, 100 per cent. It’s an education now, as much as anything else. Everyone has their nutritionist, their strength and conditioning coach, lifestyle coaches, are well looked after in regard to expense and facilities, so there are an awful lot more pluses out there than there were 20 years ago. And I wasn’t just referring to Paddy there. I was referring to players from 20 years ago, but I think players from all around the country, not just Meath, were disappointed by what he said.”

Unlike last year, Meath and Dublin are on the same side of the draw, which means if Meath beat Longford on May 26th, they’ll likely meet Dublin in the Leinster semi-final (presuming Dublin get over Offaly/Wicklow): that’s the challenge he believes every player should embrace.

“If only the guys with a chance of living are competing in any sport, you’re limiting yourself to very few numbers. Look at Kilkenny, Kerry. They go through their lean periods. Dublin have been through lean periods. And what do you do in your lean periods? You keep working harder, applying yourself better, and hope that eventually you turn things around.

“I think the level of preparation of every county is improving, and there’s no doubt Dublin have set the bar on that. And if you want to compete with them you’ve got to match it. Whether that gap is closing in level of performance I don’t know. There are a lot of people out there arguing that it isn’t, the gap is actually getting wider, but I would say the level of preparation is definitely levelling out. Dublin will always have a natural advantage because they have more players.

“But if you’re a Longford player, or a Meath player, and you don’t want the opportunity to play Dublin in Croke Park, well then in you’re in the wrong place. Going back to the attitude, if you’re playing in any sport, you want to test yourself against the best, in the biggest arena you can possibly play in, and that’s playing Dublin in Croke Park. That’s the prize for either team, and I consider it a decent prize.”

1 Tipping Point: DeChambeau’s transformation raises questions, but who will ask them?
2 Tuilagi case shows England’s home-based clause is out of date
3 Cam Newton broke the mould: Can his flame be rekindled at the Patriots?
4 The Game Changers: Vincent O’Brien, a pioneer who took Irish racing to the world
5 UK Sport to investigate ‘deeply troubling’ allegations of abuse in gymnastics
Real news has value SUBSCRIBE

Danny Welbeck’s spectacular overhead keeps Watford alive 20:36
Chelsea hold on to fourth but not without a scare at Palace 20:31
Clubs can now report prohibited county training directly to GAA 18:58
Women’s British Open to go ahead but without fans 17:16
UK Sport to investigate ‘deeply troubling’ allegations of abuse in gymnastics 18:04