‘I burst myself to win the All-Ireland. If it doesn’t happen I can’t do any more’ 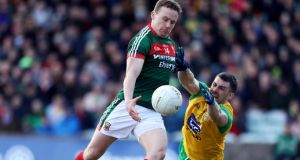 Mayo’s Andy Moran with Paddy McGrath of Donegal. “If I feel sorry for myself for five minutes I’m dead.” Photograph: Tommy Dickson/Inpho

In another lifetime Andy Moran would not be making his 165th appearance for Mayo on Sunday. At age 34, he wouldn’t be still playing intercounty football or thinking back on the six All-Ireland finals he has lost since his debut season in 2004 and wondering what if?

He wouldn’t be worrying about beating Galway, after losing their last two meetings in the Connacht championship, and instead most of his thoughts would be on his gym business in Castlebar and his wife and two children.

That doesn’t mean there is anywhere else he would rather be on Sunday than in MacHale Park, and although openly admitting he thought he would have won two All-Irelands at this stage, with or without being footballer of the year, Moran is perfectly content to just keep pressing on.

“Would I have preferred to have won an All-Ireland in 2004, got it out of the way, not to have this attention? Of course I would. But listen, it is what it is. And to me it’s just great that we are competing at the highest level of the sport that we are in.

It is a few years now since Moran reckoned this Mayo team were good enough to go and win not one but two All-Irelands despite their string of final loses: now he’s only a little less sure.

“Well, I’d take one now at this stage. We’ve had a massive journey. What I would love to think is that I’m going hell for leather to win one this year, next year. Whenever I play I think you can only have one goal.

“But the key now is that we’ve a legacy moving forward. It’s like we didn’t come, get to an All-Ireland final or two, then drop off. We’ve literally stayed there, six, seven years, and we’re hoping that these young guys that are coming in after us, the likes of Stephen Coen, Conor Loftus, all these guys that now understand that they can carry it on.

“But I thought the team at the time was good enough, I genuinely did. You see what Dublin did, they went and won two or three. That’s the sign of a really great team. No matter what you do you’d love to do it twice to show that you can back stuff up.”

Win or lose on Sunday, he expects Mayo to have a say in the latter stages, especially come the new Super-8 stage; and the same with Galway. After that if Mayo do fall short he certainly won’t be feeling sorry for himself, and 2019 might well be another year. Especially given the fact he though injury had finished his career in 2014.

“To be honest I wasn’t going to retire or anything, but I thought I was finished in 2014. I would still argue I’m not that talented of a footballer. I would live my life by working as hard as I can on my game. I’ve certain areas which I’m good at, I’ve certain areas that I’m crap at. I try to make the ones that I’m good at as best I can and then I move on. I can honestly say that if I left in the morning I could say I’ve literally tried my best.

“I actually do think it’s a tiny bit of our personality that we can kind of take stuff, give out about it for a while, and then just go at it again. I think that’s probably just the nature of our psyche.

“What I can live with is I’m playing the game, I had one or two serious injuries throughout my career, I came back, I played really well, I burst myself to win the All-Ireland. If it doesn’t happen I can’t do any more. I have a wife and two kids at home – if I feel sorry for myself for five minutes I’m dead.”