Can anyone threaten Dublin? Seán Moran’s guide to the challenge from the east 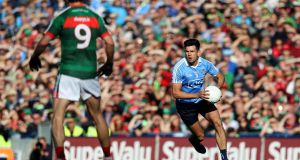 Does Brendan Murphy’s departure for the summer substantiate the sense that promotion from Division Four might be Carlow’s main box ticked? Last year was their busiest summer since the 1940s and they should be buoyant with a winnable first round. Despite the stereotype of having more parked buses than Broadstone garage, they were fourth highest scorers in the league.

So far, so good, as Jim Gavin eyes up becoming only the fourth team to win four-in-a-row – having won a fifth league title in six years. Lack of provincial competition gives space for injuries and whatever cogitations are occupying Diarmuid Connolly. Defence could do with Cian O’Sullivan and Jack McCaffrey back but they were top scorers in the league.

Disappointing relegation from Division One, although three defeats were by less than a score. Still Dublin’s strongest challengers and looked lively in their recent win over Tipperary. Talented forward Neil Flynn injured his hamstring again in a club match. Kevin Feely at centrefield and Daniel Flynn are the big players but Kildare also had the second leakiest defence in the league.

The recent tumbling down the league was turned around with promotion out of Division Four and the divisional title. Manager John Sugrue has tried a number of players – 29 were used in a recent challenge – but injuries rule out first-choice players, including Evan O’Carroll and Brendan Quigley. Attack remains strong with Donie Kingston and top league scorer Gary Walsh.

A hugely frustrating league campaign saw late concessions against top counties Armagh and Fermanagh effectively deprive Longford of promotion but the season together with recent form in the qualifiers suggests an improving team. Michael Quinn is back after missing the latter part of the league and Liam Connerton, son of the manager, is playing again after a cruciate injury.

A grim year to date for Louth, as they became one of only two teams to end up with nul points in the league. A number of players have walked away and Peter McGrath has it all to do if he is to get any championship bounce. The cause isn’t helped by the injury to forward stalwart Jim McEneaney.

Next up: v Longford, Glennon Brothers Pearse Park, 27th May

It’s clear that the McEntee effect would have needed to be alchemy to fulfil some of the wilder expectations. The league featured the usual inconsistency and a brush with relegation. Whereas the attack put up good scores, they were often chaotic at the back. Confidence fragile, as they haven’t beaten Division One opposition in the championship for eight years.

Next up: v Wicklow, O’Moore Park, Portlaoise, 13th May

Few detectable signs of improvement in Offaly. Another lacklustre league campaign has been followed by controversies over a suspension for manager Stephen Wallace, picked up with his club in Kerry, and the tug-of-love with the under-20s over teenage prodigy Cian Johnson. On the upside, Wicklow offer some prospect of only a second win in Leinster in 10 years.

After a good start in the league Westmeath fell away and ended the campaign with two disappointing defeats, costing them promotion. Championship has ended at Dublin’s hands for the past three seasons and although they are on the other side of the draw this time, they don’t appear as strong as in recent years.

Since clinching promotion from Division Four last year, it’s been all downhill for Wexford, who slumped to relegation in the league. There’s been a big player turnover – about half last year’s championship team are no longer involved – which hasn’t helped, as Paul McLoughlin struggles to rebuild. Home advantage is welcome but an upwardly mobile Laois less so.

Ten years after the great breakthrough of their first Croke Park championship victory, Wicklow didn’t win a match in what was admittedly an unfinished league – due to weather postponements – and ended officially as the bottom county in Ireland. John Evans is optimistically stressing that the championship will be different while simultaneously aware of the scale of the rebuilding task.