Championship 2018 Football: Time to play it again for Sam

So which county can wrestle the coveted Sam Maguire from the hands of the Dubs? 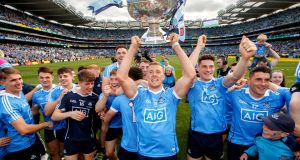 Dublin’s Paul Mannion with the Sam Maguire after the defeat of Mayo in the 2017 All-Ireland final in Croke Park. Photograph: James Crombie/Inpho

There is no turning back now. The grass has been cut, the pitches lined, the referees have their bags packed and cards in order, and starting Saturday, when Carlow and Louth spark it up in Portlaoise, the games will come thick and fast.

The All-Ireland Senior Football Championship used to mimic the energy patterns of a lioness on the plains, with furious bursts of activity and hunting followed by long periods of nothing much happening at all.

It was a slow-burning, lazy kind of rhythm by which Ireland measured its summers for decades, and it all led up to the enshrined date, the third Sunday of September, when two counties, usually Kerry and somebody else, went to war for the Sam Maguire. After that came autumn.

But 2018 will be different, with all provincial finals done and dusted before June is out. The newly-minted Super 8s series is scheduled to start on the weekend of July 14th-15th, coinciding with Fifa’s World Cup final in Moscow.

The new hurling champions will begin their celebrations on Sunday, August 19th, while the football championship will have its big day on September 2nd.

By this Sunday evening, four counties, including All-Ireland calibre sides, will find themselves in the no-man’s land of the qualifier series.

A GAA tourist could start their weekend in Portlaoise, motor down to Wexford to catch their 6.30pm throw in against Laois, and then shoot for Castlebar or Ballybofey on Sunday afternoon for either of the crucial dust-ups in those jurisdictions.

This radical innovation to the championship schedule, which will remain in place for at least three seasons (but more likely forever), coincides with the emergence of a frighteningly deep, athletic and ambitious Dublin team. The sweeping championship changes and Dublin’s ownership of the All-Ireland championship for the last three seasons makes it feel as if the old ways and traditions of the championship and the organisation itself has been ushered into a new era.

The most immediate impact will be seen – or, more pertinently, not seen – in the coming weeks with the vast reduction in the number of provincial games shown live on television. In an age when the GAA is enjoying keen bidding competitions for broadcast rights, it will mark a return to the dark ages for big provincial rivalries, with the fierce Monaghan-Tyrone rivalry among the games unavailable to a national audience.

The main theme of this year’s championship is whether any team can stop Dublin. This week’s announcement that the Dublin has agreed sponsorship terms worth €5 million over the next five years was a timely reminder of the enviable position that the city teams now occupy.

It means that they operate in a different realm than the vast majority of counties, and makes it easier to envisage a situation where other teams simply can’t live with Dublin’s financial resources and population.

From the end of the Kevin Heffernan era in 1983 to 2011, Dublin landed just one All-Ireland championship, that parched win by Jim Gavin and company in the hot summer of 1995. But Dublin also won 13 Leinster championships in that period; they were never all that far away from the All-Ireland conversation.

Once Dublin began to fully exploit its potential, the county was always going to move to the forefront of the competition. It remains to be seen whether this is the beginning of a dynasty that will demoralise all other counties in what is an amateur competition or whether this is merely the bottled lightning of an exceptional team.

The absence of Diarmuid Connolly and the injury to Bernard Brogan deprives the squad of two of its most innovative attacking talents. Yet in previous seasons Dublin have made light of the absence of virtuoso talents so easily that it was easy to forget they were missing. Yet for all their habit of crushing teams in the early stages of the competition, their All-Ireland titles have been nail-biting, hard won and absolutely gripping.

Had they lost the All-Ireland finals of 2011 and 2015 to Kerry, and had they lost those gripping finales against Mayo by a point, then the conversation would be different this weekend. But they won; five of the last seven All-Ireland titles and they are favourites again this time.

Dublin’s perpetual appetite for further honours has intensified the pressure on other leading teams Kerry, Tyrone, Mayo, and has become the measure for emerging sides like Galway, Roscommon and Tipperary.

Monaghan and Donegal are among the contenders who see themselves as belonging to the brave new world of the Super 8s. Some counties are going to get squeezed before then. It won’t be Dublin. It will take a monumental performance to unseat the All-Ireland champions.

Who among you all has the stuff?