After 20 years, can Dublin’s cream finally get the Cats?

Dublin didn’t live up to the hype at Parnell Park in 1998, but they’re bullish about Sunday 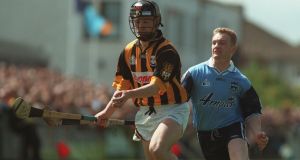 This Sunday, Dublin face Kilkenny in the championship at Parnell Park for the first time in 20 years. It feels like a lifetime away and is milestoned by the entirety of Brian Cody’s managerial career, as he took up the Kilkenny reins the following season.

During that time the counties have met 11 times and, although Dublin achieved an historic breakthrough in 2013, a first win over Kilkenny since 1942, and went on to win a first Leinster in 52 years, there hasn’t been a meeting of the counties during that time which has seen anything like the bullishness about Dublin’s prospects that swirled around the 1998 fixture.

The context owed something to the previous year when, before a record attendance for a Leinster semi-final double bill (52,079 – 4,000 of whom had to be shepherded across Croke Park from the new Cusack Stand to the Hogan due to overcrowding caused by an estimated 10,000 children and senior citizens being granted free but unticketed admission in a Leinster Council promotion), Dublin led until the last 10 minutes – at which point a 90-second barrage of two goals from PJ Delaney and DJ Carey turned the match in Kilkenny’s favour.

Adding to the optimism in Dublin was that in early 1998 under Michael O’Grady, they had enjoyed a respectable league, finishing mid-table in one of the Division One groups, whereas Kilkenny finished bottom of the other.

New manager Kevin Fennelly, who would go on also to manage Dublin, was also trying to manage the distraction of DJ Carey’s “retirement” from hurling in February of that year because of business pressures. Carey had reconsidered by the time the championship rolled along, but Dublin were fancied by a broad consensus.

Before going on to a career in administration, culminating in the presidency, Nickey Brennan had managed Kilkenny in 1997 when Dublin had rattled them at Croke Park, but he remained a little sceptical about how transformative the choice of venue would turn out to be.

“There’s no doubt that Parnell Park helps Dublin, psychologically,” he says, “and on Sunday that effect is increased by the frequent underage successes the county has had against Kilkenny in the past 10 to 15 years. I felt, though, in 1998 that they maybe over-relied on it because it can only be so big a factor in championship. But then, players probably feel that they perform better there.”

He also feels that the 1997 experience might well have benefited Kilkenny as much as their rivals.

“It’s a trait of Kilkenny that no matter where they are in a match they’ll keep it going until the final whistle. Historically they’re good at coming late in a match. That would have been proved again in ’97, which was good for their confidence and could have created anxiety in Dublin.”

On the day there was no need for a late, late show. Before a big crowd of 10,000 in Donnycarney, Dublin started competitively, rode out the concession of an early goal and trailed by just a point, 0-11 to 1-9, at half-time.

On the resumption, the roof caved in. Charlie Carter had a goal within two minutes, as part of an unanswered 1-4 in the seven minutes after the break. That was effectively that: Dublin managed just three points in the whole of the second half before going down 0-14 to 4-23.

After the match Carter wasn’t slow to call to account the pre-match consensus: “We kept a low profile, we hadn’t hurled well in the league, but Kilkenny never hurl well on a soft sod. And the newspapers hyped up Dublin a bit too much. Sort of shot themselves in the foot,” he said.

His clubmate Carey, scorer of 1-8, was characteristically more emollient. “I do feel sorry for Dublin . . . they came in here with high expectations and justifiably so, and today was a setback. But it should only be a small setback. Hurling needs a Dublin All-Ireland; I said that to them in the dressing-room last year and I still say it.”

Dublin manager Michael O’Grady shared the optimism in a brisk assessment. “They played championship hurling; we didn’t. It’s not a huge setback ,this; it’s a young team and they can come back.”

In the event, they didn’t, and it would be well over a decade before the revival gained any significant traction.

As for this coming weekend, it is possible to catch suggestions of optimism around the county that, after an underwhelming league, Dublin can come good in the new championship format, which affords them a couple of home fixtures, starting on Sunday.

Nickey Brennan can understand the optimism, but believes that if the task facing new manager Pat Gilroy is be successfully completed, it will be a long-term project.

“Dublin hurling sits in the shadow of the footballers to a large degree. You can see why bringing someone like Pat Gilroy on board made sense. From a hurling point of view, Mattie Kenny [former Galway mentor, who has guided Dublin champions Cuala to back-to-back All-Irelands] may have brought more to the table, but Gilroy, with the status of what he achieved with the footballers and his man-management skills, may be more needed with the present crop of hurlers.

“It may well be that his programme will take a couple of years to come to fruition. The league went pear-shaped for them but he might well have been using it to transition to the championship. We’ll know on Sunday whether that transition has taken place.”

Finally, in Kilkenny on Tuesday night, record club All-Ireland winners Ballyhale Shamrocks will launch a fundraising drive in Carroll’s Hotel, Knocktopher, at 8.30. The scheme will run for five years and is targeting improved facilities for future generations.

“Hurling with the Stars” is a draw for clubs which offers a one-day coaching session for up to three teams to be held in Ballyhale and conducted by former All-Ireland winning captains Ger Fennelly (1979), Liam Fennelly (1983, 1992), Michael Fennelly (2009), James “Cha” Fitzpatrick (2008) and Henry Shefflin (2007) as well as current stars Colin Fennelly, Joey Holden, Richie Reid and TJ Reid.

According to the club’s press release, “‘Hurling with the Stars’ aims at working with the wider GAA family so as to upgrade our facilities (via the purchase, initially, of a juvenile pitch). We are a small rural parish of 850 people and necessarily must look outside for partners as regards our development draw.”

Cards of 25 lines, at €10 each, are available, with the purchasing club keeping €150 and the other €100 going to Ballyhale. Further details on the website, hurlingwiththestars.com.

1 Monica Seles: The warrior queen who could have been the best ever
2 Ferrari’s Charles Leclerc ‘will not take the knee’ before Austria GP
3 Matt Williams: Six Nations must recognise the desire for revolution outside Europe
4 Séamus Power huffs and puffs as Wolff blows the door down in Detroit
5 Glorious Greenwood as Man United thrash Bournemouth
Real news has value SUBSCRIBE