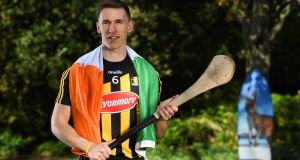 Cillian Buckley: “I’m sure the game itself will be taken as serious as would be expected. With Galway being the opposition I don’t think that will be too difficult.” Photograph: Harry Murphy/Sportsfile

Even after all these years – 20, to be exact – there is no doubting Brian Cody’s commitment, Cillian Buckley admitting he fully expected Cody to remain as Kilkenny manager for 2019.

Cody first took charge in November 1998, and 11 All-Irelands and nine league titles later is in Buckley’s words beginning all over again – starting with next week’s trip to Sydney to face Galway in the inaugural Wild Geese Trophy.

Four Kilkenny players will be putting club before county, TJ Reid, Joey Holden, Richie Reid and Colin Fennelly are preparing for the Leinster club championship having won back the county title on Sunday, but Cody will definitely be on the plane, already plotting 2019.

“Brian is definitely going, yeah,” says Buckley, speaking ahead of the November 11th showdown against the 2017 All-Ireland champions, Kilkenny earning their tickets as 2018 Allianz League champions.

“It’s unreal he’s there 20 years now, and there’s obviously all sorts of facts, stats and figures behind those 20 years that are serious. Brian just delivers the message whether it be year one or year 20 that it’s the next year and that’s the way we are going into it too. We weren’t far away so we are looking forward to getting stuck into it.

“It’s totally kept separate from the players regards to what’s happening and we were pulled together with this coming up, you were just presuming he was coming back.

“There was never really a question mark put on it from the players’ point of view and it would have been more of a surprise if he stepped away to be honest. The consensus is the team are delighted to see Brian back.”

The Sydney game, says Buckley, will feel more like a starting point for 2019; it’s been a long-time planned, even if it meant booking holiday time back in April.

“I’m working in UPMC [engineering] Whitfield, and we knew this was coming since April so the summer holidays were little to none. I kept the days and work are being good and letting me go.

“We initially had 35 or so listed, and obviously there were question marks beside a few guys with the county finals at the weekend, and we’re down the Ballyhale lads now.

“But we’re all seeing this as something to look forward to, and a line in the sand from last year, and kind of day one of 2019 too. As much as we are going over to enjoy ourselves, I’m sure the game itself will be taken as serious as would be expected.

“With Galway being the opposition I don’t think that will be too difficult either, so I think come the Sunday it deserves to be taken and played with respect. The fact that it’s a proper 35 minute a half game it can naturally turn into a good competitive match, and that’s the message being given. It’s a full-size pitch, a proper hurling match with proper scores.

“At the end of the day we have no championship to show for 2019, so from that sense it’s disappointing but there’s definitely positivity and enthusiasm there that we can still mix it with the top six or eight teams and still be one of those teams to contend for 2019.”

1 America at Large: Hurling fan Dowling leading the fight against Covid-19
2 Conor McDonald: ‘People in fitness industry need to be careful what they put online’
3 Alex Ferguson pays tribute to ‘magnificent’ NHS
4 Germany well ahead of the curve as Bundesliga gears up for return to action
5 Joanne O’Riordan: The deep comfort of the simple daily sporting ritual
Real news has value SUBSCRIBE