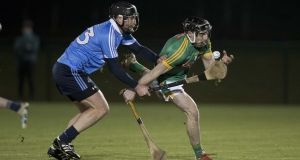 Dublin hurler Donal Burke scored a goal in each half as DCU beat LIT in the Fitxgibbon Cup in Limerick. Photograph: Morgan Treacy/Inpho

Patrick Curran’s added-time free secured victory for DCU but they made hard work of the win after Davy Fitzgerald’s LIT staged a powerful second-half comeback in the Fitzgibbon Cup in Limerick.

Dublin prospect Donal Burke hit goals in each half for DCU, while Curran also rattled the net in the first half, but with Clare’s Peter Duggan on song at the edge of the square, LIT pushed them all the way.

After an impressive start DCU lead by a point after 10 minutes, but they pulled four clear when Burke scored his first goal after 11 minutes.

Duggan, who fired 1-11 of his side’s tally, scored a free immediately after the goal to settle LIT, but instead DCU surged further ahead when Curran finished low past Cian Hedderman, which put his side 2-3 to 0-3 ahead.

Duggan, Offaly’s Oisín Kelly and local player Andrew La Touche Cosgrave were at the heart of LIT’s comeback and a point from David Reidy ensured LIT only trailed by 2-7 to 0-8 at the interval.

Despite a good Rian McBride point for DCU shortly after the restart, LIT came with a strong start to the second period when Duggan converted a penalty after 34 minutes. Reidy and Duggan then added further points as LIT gained confidence and intensity, but with Curran now on free-taking duty DCU kept Fitzgerald’s side at bay.

Reidy hit a second goal for LIT with five minutes remaining and Duggan converted a couple of placed balls to level matters, but Curran showed great nerve to hit the winner in the 62nd minute.