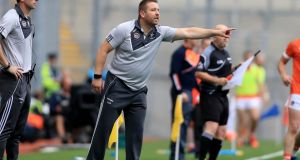 Cian O’Neill: “We have to put in a massive performance, bigger than any performance that we have put in during my three years.” Photograph: Donall Farmer /Inpho

Any payment of intercounty managers, in the strictly legitimate sense, naturally, would be unsustainable within the GAA – not that Cian O’Neill would go full-time even if he was asked.

O’Neill is entering his third season as Kildare football manager, and despite the increasing workload and enduringly long commute, still considers it a “very busy hobby”.

The only worry, he says, is where it’s all going.

“I don’t know of any manager who would actually like to do it full time,” says O’Neill. “I don’t even know if that appetite is there.

“I like the fact that it’s a hobby, albeit a very busy hobby. I’m sure there are people who would see it as a potential career move. The danger is if you’re going to pay someone to be involved in a set-up, then where does it all stop? We’re not an international game. We’re not even a European game. So we don’t have these big TV rights that you have in rugby or soccer to sustain that.

“I’m not an economist. I don’t know the fiscal background of the GAA. But I can only imagine that if one cohort gets paid, why isn’t everybody? And that would be a very dangerous place to be.”

O’Neill speaks with considerable experience: he was previously part of Kerry’s All-Ireland winning backroom team of 2014, and likewise with Tipperary’s All-Ireland hurling success in 2010; he’s also worked with Mayo and Limerick football, and coached for 13 years at the University of Limerick.

Since taking charge of Kildare, he’s been commuting three days a week from his work at Cork Institute of Technology (CIT), where he heads the Department of Sport and Leisure Studies: “I love my job, love being involved with third level students.

“It is incredibly demanding, but it’s your choice. And I’d like to place it in the context that I absolute love it. Love driving in the gates of Hawkfield in the winter and St Conleth’s in the summer, being in the gym with the lads on a Friday.

“Does it put pressure or strain on your life outside of football? Of course it does. I’m very lucky that my work, CIT, are very supportive. My background is that whole sports domain, and I’m lucky I have a very supportive wife, she gets it.

“I don’t know how sustainable it is, is what I’m saying. And when work is particularly busy, that makes everything more busy. So it is a challenge. And you know there’s a shelf life in it as well. So it’s my responsibility to put everything into it while I’m still in a position to do it. It won’t last forever.”

Indeed O’Neill has more pressing concerns, Kildare back in division one, and starting out with All-Ireland champions Dublin in the Allianz Football League on Saturday week in Croke Park.

Preparations, he says, have gone well, although at least seven Kildare players are involved in the first round of the Sigerson Cup next week, so fingers crossed. (Chris Healy and Kevin Feely at Carlow IT, Ruadhán Ó Giolláin, Daniel Flynn, Paul Cribbin, Paddy Brophy Mark Hyland at Maynooth).

“Not ideal, is it tricky. I understand how difficult it is this year just to have that round literally just before the first round of the league, for anyone, not just us.”

Some consolation, perhaps, in that Dublin come in cold – or rather just back from a team holiday in South Africa.

“You need to be careful what you wish for,” says O’Neill. “That’s been thrown out there. There’s logic to it. They are only back a couple of weeks from holidays but, that being said, Dublin have been involved for the last three years in All-Ireland finals.

“We have to put in a massive performance, bigger than any performance that we have put in during my three years and see if that’s good enough to beat them. For us, the big thing is to put in performances across Division One as a whole. Dublin steamrolled over most people from the Leinster final on last year, and never field a weak team or a team that doesn’t know how to win.

“And let’s be honest about it, they’re that bit further ahead of everybody. And it’s up to every team to up their standards and up their performances. I mean, to be fair to Mayo, it’s not as if Dublin have been winning finals by eight, nine, ten points.

“If you think of their last three All-Ireland finals, what has it mean? One point, one point and three points against Kerry. So I think as you get closer to the top, that divide is lessening and lessening. But are their performances dipping? I don’t think they’re dipping at all. You’d be very naïve to think that.”