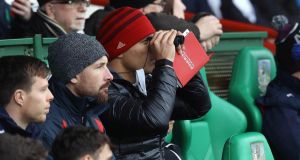 Cork backroom staff member Doug Howlett takes a clsoer look at the action during the Allianz Hurling League Division 1A game between Limerick and Cork at the Gaelic Grounds. Photograph: Lorraine O’Sullivan/Inpho

Cork manager John Meyler must have been the happiest man in the country after his side became the first team to put a halt to All-Ireland champions Limerick in a thriller at the Gaelic Grounds on Sunday.

And with such a polished display, especially in the first half, only two substitutions were required and both of those after an hour.

Losing manager John Kiely will also have learned a great deal from his much changed team, who found themselves nine points behind at one stage and six adrift at half-time before battling back to be level four minutes from the end.

Not for the first time Pat Horgan was tormentor in chief for Limerick and he scored 1-7 in the first half and finished with 1-9 to his credit, with all nine points coming from frees.

Limerick will bemoan hitting nine wides in the first half, and eight more in the second, which they dominated. With the scores tied near the end, Cian Lynch was heading for goal when called back for a free.

Cork flew from the traps and swept into a lead of three points with scores from Aidan Walsh and two frees by Horgan inside as many minutes.

Two Shane Dowling points, one from a free, brought Limerick to 0-3 but by that stage Cork had scored 1-9, with the last of those points being a long-range free by Tim O’Mahony.

That was the fourth Cork score without reply but suddenly Limerick found a bit of form and a Dowling free was followed by a superbly worked goal with Peter Casey giving Patrick Collins no chance. That made it 1-10 to 1-4 and by half-time the Rebels led 1-13 to 1-6.

Whatever Kiely said to his players at the break it looked like paying dividends when Casey, Dowling, and Diarmuid Byrnes, with a huge free from distance, and Flanagan made it a two-point game as the crowd of 13,407 settled in for a thriller.

Dan Dooley steadied the ship for Cork, who then grabbed their second goal after a short puck-out by Nickie Quaid was blasted to the net by Conor Lehane to make it 2-15 to 1-11.

It certainly proved to be a game of two halves, with Cork winning the first comfortably when they took on Limerick at their style of game as they hustled and harried to great effect.

But with a free-taker like Horgan, Cork will always be a match for the best and in the second half their goalkeeper Collins made two superb saves. Eoin Cadogan and Stephen McDonnell shone in the full-back line and midfielders Cormac Murphy and Bill Cooper hit three points between them with Murphy’s second nudging Cork back into the lead after Limerick had drawn level.

Limerick gave a debut to teenager Mike O’Brien and he fared well.

While Dowling scored six points, three frees, he missed a number of opportunities, especially in the first half.

Limerick’s defence was under pressure from the start but Tom Condon and Seán Finn did well while there was another superb scoring display by halfback Diarmuid Byrnes who scored six points, all from long range, including four frees and one 65.

Cian Lynch took time to get going and up front Peter Casey was the main man.

Limerick were short several of those who played in the All-Ireland final and a first defeat since last June in competitive action will not dampen enthusiasm for the visit to Clare next Sunday.

Resurgent Cork will be well pleased with the win but they again relied on Horgan, although both midfielders and all six forwards got on the scoresheet.