With Limerick already through, five teams will sort out who goes where in quarter-finals 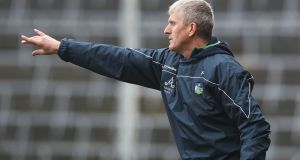 Limerick manager John Kiely: expecting his side to get back to full strength after injuries. Photograph: Lorraine O’Sullivan/Inpho

After all the shadow-boxing, the hurling league moves on to something approaching full-contact sparring this weekend. While it will still be a fair distance off the real stuff of summer, there will at least be something at stake – specifically the sorting of out of who will go where in the league quarter-finals on Sunday week.

With Limerick already through to the knockout stage in 1A, all five remaining teams head into the weekend with a chance of maintaining their interest beyond it. Everyone has ifs and buts to negotiate, but, in each case, winning generally simplifies matters.

For Kilkenny, Wexford, Cork and Clare, any sort of win on Sunday ensures a quarter-final spot. The first two named face off in Wexford Park, where a draw will guarantee passage for the home side but would leave Brian Cody’s men needing at least one of Cork or Clare to lose.

Clare host Limerick in Ennis and could go through with a draw, as long as there’s a positive result one way or the other in the Wexford v Kilkenny game. But again, winning would cut through all the permutations.

Tipperary’s chance is slimmest of everyone’s – and yet it’s by no means out of the question. First off, they need to beat Cork in Páirc Uí Rinn; anything less than a victory there will see them finish bottom of the table. With a win, they need Limerick to beat Clare in Ennis, which would see them through on points difference. In the event that Clare beat Limerick, anything but a draw in Wexford will do the trick for Liam Sheedy’s side.

Although there is no relegation from Division 1A this year, it bears pointing out that there will still be a relegation play-off on Sunday week. At least that’s what the GAA are calling the game that will take place between the teams finishing fifth and sixth in the table.

Since this year’s league is still technically being played out under existing rules, the play-off determines final placings ahead of the redrawing of the league for next year. Thus every county will have a game to play on March 10th, although presumably there will be neither skin nor hair flying in said play-off.

Limerick’s gallop may have been momentarily halted by Cork over the weekend, but they had welcome news towards the end of last week when David Reidy returned from injury to play an in-house game on Friday night. Reidy hasn’t played since coming on in the All-Ireland semi-final last August, but John Kiely says he’s back in full training and will be available for the rest of the league. Piece by piece, the All-Ireland champions are approaching full strength.

“Mike Casey is continuing his rehab but he will be a couple of weeks away from being able to return to play,” Kiely says. “Will O’Donoghue is also rehabbing and being monitored as to how soon he can return to full training. As is Paul Browne, who is working hard and will be able to take part in full training soon.”

Competition is less keen in Division 1B where Galway, Waterford and Dublin are safely through as expected

Cork’s injury list is shortening by the week as well. Their only real long-term absentee is Colm Spillane, who manager John Meyler concedes will not be back until the summer. “Colm won’t play in the league,” Meyler says. “Apart from that, Eoghan Murphy got injured playing for UCC and Declan Dalton should be back in a few weeks.”

Competition is less keen in Division 1B where Galway, Waterford and Dublin are safely through as expected. Laois are ahead of Carlow in the race for the fourth spot but face the much tougher final-round fixture as they go to Parnell Park to play Dublin, while Carlow have a home tie against winless Offaly.

Ringrose set for new central deal; memories of Björn Borg at Wimbledon 06:50
Seán Moran: What nostalgia tells us about how the GAA sees itself 06:20
Six Nations rugby needs to be protected for terrestrial TV 06:00
My favourite sporting moment: Game, set and couch as Borg takes down McEnroe 06:29
Dr Claire Molloy: ‘It is a privileged place to be, on the frontline’ 06:21
Crossword Get access to over 6,000 interactive crosswords